After I had approved the bed making this morning, LOL, I phoned the grocery store to discover the artichokes had come in last night. I decided to shoot down and get some (if shooting is any longer possible) I had also called Victoria St. Market as, for some reason, the grocery store has no tonic water. They had some smallish bottles so figured I would go there too. I parked round the back of the  grocery store as I figured it was easier for me, walking with a cane, than the other side. I was lucky and picked up a shopping cart near where I parked. I then saw a young man bringing in carts and disinfecting them so asked him to disinfect mine. All set so I went in and found the artichokes. I also picked up a couple of white flesh peaches, these are the only ones which fit the freestone description. They are not very ripe yet but they should be OK later. I picked up a few other things like raspberries and Portobellas,then back to the car. Went to VSM and picked up the bottles of tonic, ended up with two lots just in case. They had more fresh corn so I decided to get some. Saw some home made looking butter tarts which I thought Matt would enjoy. I had one later in the day, not bad. Don't think I will eat any more though, not good for my sylph like (I wish) figure.

Getting home, my feet were killing me. Did I tell you I have gout in my big toes. I am a tad embarrassed - not sure why except, to me, gout is something old men who sank a bottle of port every day, suffered from. I remember one saw pictures of them with a foot up on a stool with the foot being swathed in bandages. It's something which comes and goes and right now it is raging in both feet. I take medication but it doesn't seem to be doing anything at the moment.

By this time, of course, it was lunchtime so I made lunch for both of us and, at the same time, popped a couple of artichokes in the Instant Pot. Didn't really mean to, but couldn't resist them once they were cooked so finished off my lunch that way.

Finished my book and started the Alex Trebek book which I got from ladydog. Didn't get very far when I couldn't keep my eyes open. Not the book's fault, I was just tired.

I had taken shrimp out of the freezer for supper and I suddenly thought of the Jambalaya recipe I have been making for years and yet not for a number of years. It used to be a big favourite of a friend in NC who had a shrimp boat and would give me a pile of shrimp so I would make it and bring it to a party. He would then eat it for breakfast and for any meal he had enough left for. I don't really know why I haven't made it for so long. Anyway, I realised I had some rice from last night so off I went. I had to improvise a bit mind you. I used a red pepper, sweet onions as I had no green onions and I used grape tomatoes which worked fine. Of course I had to cook the shrimp but chilled them in the freezer for a while. Not that long although I then left the whole dish in the fridge until I was ready to serve and got complaints that it was too cold. I thought it was fine myself. The recipe came from the Cambridge Times (think that's what it was called) many a long year ago. I also cooked the corn beforehand and much to my surprise, Matt ate his. 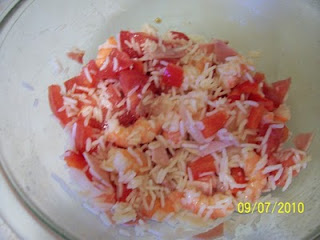