Bit of a Frustrating Day,

Meanwhile, I was washing sheets and a couple of shirts that Matt and I had splattered at supper. So I was running back and forth to the laundry room. I was expecting George, the Columbian at 10 and planned to be showered and dressed before he arrived. Joke with phone calls and laundry together.

The phone went and George just said "I'm here", just as well I knew it was him. I told him off for not saying "Estoy aqui". He took Matt off and I decided to jump in the shower whilst he was showering Matt. Of course they do Matt's exercises on my bed as it is higher, so I had to wait to get dressed didn't I? Eventually George left and by this time it was lunch making time. I got a call from the grocery saying my order was ready except for this and that. Sorted that out and got on with lunch..

After lunch, the phone went and it was the family doc. who was supposed to call me for a consult tomorrow. Threw me for a loop, thought I was on the wrong day. Had a long chat with him about a pill I wanted to change as I am having trouble swallowing pills lately (old age). Plus discussing the ops I am supposed to have. I mentioned the prescription for Matt too so we had a long chat about that.as well, he is fairly new at the clinic and didn't know about Matt's TIAs some years ago.

I phoned Kathy at some point to tell her my groceries were ready and then had to leave a message so got a tad agitated but eventually got a message saying she was already at the store. Then there was a phone call from the pharmacy saying no fax yet. The phone rang and it was the delivery guy, I had ordered some booze to be delivered, partly my free delivery they owed and partly, it is too hot to line up outside the liquor store (34°C). They didn't have the size of Matt's gin, sorted that. Shortly after he phoned again, he couldn't find my bubbly, he did whilst we spoke.   Eventually it rang and it was Kathy so I opened the door. I put away the frozen stuff and then we sat down to have a coffee. The phone went, it was Charles who delivers our drugs, he was bringing me the one missing pill. Then the phone went and it was the delivery guy with the booze. Finally, we sat and chatted.

I don't remember if I have ever mentioned Matt's fixation on three pine trees outside our window which he watches to see if they are moving in the wind or not. Kathy is certainly aware of it. It ended up with the two of them discussing the movement of the damned trees and discussing it and figuring out the weather and then watching them some more. They were driving me bonkers the pair of them. I nearly had to ask her to leave!!! I am doing some proofing for her, I have done the first one although I want to check it again. She had remembered to bring the van so she took our Sjoelbak board that we had bought many years ago and never use any more. She had a small one and was delighted to get the full size board. I was almost sorry to see it go, but it is ridiculous just having it sit in the cupboard and never being used. It is a fun game, Google describe it as Dutch shuffleboard.

When Kathy left I began to put away the shopping. Guess what, I only have 8 bananas!!! Every week my order says I want 14 but I guess they don't read it or something.

We got one more phone call, the PSW for tomorrow telling me she was coming at 10.

I tried out a new chicken dish in my Instant Pot, it was pretty good. I have cans of all kinds of soup but not mushroom so I ended up using celery soup and it worked fine. I also cooked 8 chicken thighs and we had 2 each for supper.

An almost embarrassingly easy recipe for a good old fashioned dinner. Serve the chicken and gravy 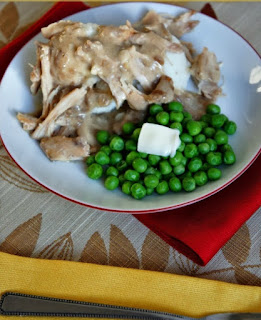 2. Cover and make sure the valve is on “sealing.” Set the timer on manual (high pressure) for 15 minutes. When the timer beeps let the pressure release naturally for 5-10 minutes and then release the rest of the pressure by moving the valve to “venting.” Remove the lid.

3. Use a spoon to break up the chicken. Serve chicken and gravy over potatoes, noodles, toast, biscuits or rice