For those of you who have never heard of biting ladybugs, here is a picture of one. 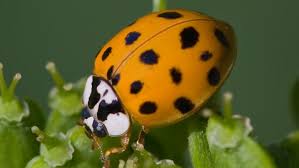 I don't think it is a very serious bite, so far I haven't been bitten one, fingers crossed. They are an Asian invader but I don't know how they got here. The apparently stink too. Here is an article which I am glad I have read because I didn't know they could swarm and look for a hiding place to spend the winter in one's home. I need to have a good look round. From the article pictures, they come in all kinds of shades of brown to yellow and some in the pictures looked vaguely red. I remember as a kid with the pretty, red, harmless ladybird, as we called them,  We used to get one on our hands and say:

Ladybird, ladybird fly away home
Your house is on fire and your children are gone.

No idea where that came from or what exactly it meant. Of course Google did. It is something to do with Pagans hiding. The verse quoted was somewhat different to what we said as kids and there were more lines. Anyway, if they are spreading in Canada, I have no doubt they will cross the border into the States in a very few years.

Look what I've got - it's heavy so I had to move it around on my walker. I couldn't seem to get any from my grocery store so I ordered them from Costco. they just arrived. I thought I placed an order with someone else but couldn't find it to cancel. I hope it didn't go through. If it did I am going to be a TP hoarder as well. I must say the UPS guy certainly maintained his social distance when he pushed the box round the door jamb. I complained because they charged me $3 surcharge for 2 day delivery. I didn't request that. I certainly have enough TP for another couple of days or so.

We just watched Friar Alessandro on TV. He is a friar from Assisi (Frances of Assisi) with the most wonderful voice. Just to show you what I mean here is a video of him singing Panis Angelicus


Mind you. he's had a haircut since this was recorded. Watching him sing, I got the feeling he wasn't really singing, he was praying. He brought tears to my eyes several times. Amongst other songs, he sang Ave Maria and Amazing Grace. An incredible voice.

I posted a Beef Stroganoff recipe which was made with ground beef, this one is made with stewing beef. It looks really good.

A truly one-pot meal! Fork-tender beef and mushrooms with egg noodles. This recipe is written using 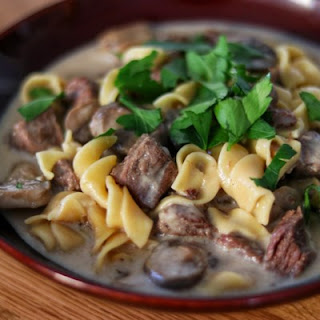 1. Turn on a multi-cooker (such as Instant Pot(R)) and select Saute function. Heat oil for 1 minute. Add onion and 1/2 teaspoon salt; cook and stir until onion begins to soften, 3 to 4 minutes.

2. Season beef with 1 teaspoon salt and pepper. Add to the pot. Cook and stir until browned evenly on all sides, about 2 minutes. Add garlic and thyme; cook until fragrant, about 30 seconds. Pour in soy sauce.

3. Stir mushrooms into the pot. Stir in flour until evenly incorporated. Pour in chicken broth and remaining 1/2 teaspoon salt. Close and lock the lid. Set timer for 10 minutes. Set to high pressure according to manufacturer's instructions, 10 to 15 minutes.

One thing I forgot to say yesterday, if there are so few vehicles on the roads right now, how come people are still crashing into one another. I still keep hearing reports on the radio of accidents. Must be absolutely lousy drivers.

The noodle dish I posted yesterday: I made it with Oriental Noodles, not so successful. I should have stuck to spaghetti or found a lighter recipe for the sauce I think. Anyway, that's enough carbs for a while. Especially as we had potstickers for supper. I did at least serve some broccoli on the side so we got some healthy greens.

One thing I did do today, I happened to look behind the sofa bed in my computer room and found a plethora of dead ladybugs, you know, the nasty kind that bite. I was not sorry to see their demise. I got our my hand held and got rid of them that way. I don't  know why there rather than anywhere else. Seemed odd.

Another thing I forgot to tell you. You know I was carrying on about sewing and then eventually got round to sewing a pair of pants which has been sitting waiting for at least a year, well a couple of days ago, I found that a seam in the rear had come unstitched too. I have no idea how long I have been going around with my rear end sticking out. I certainly didn't notice it before. They are now waiting to be sewn again, not sure how long it will take this time. I have contemplated getting one of those hand held sewing machines, have you seen them? Has anyone tried one? I would be interested to know. For the kind of stuff I need, it would be ideal if they work.

So then I did some Googling for Noodle Soup 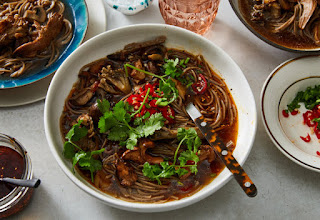 which also happens to be vegan. With the addition of soy sauce, the broth takes on an almost beefy flavor; the vinegar helps to perk it right back up for a nearly hot and sour flavor profile. For the best (and most interesting) results, try to seek out a mix of mushrooms for a variety of flavors and textures.

2. Cook, stirring occasionally, until the mushrooms have softened, released much of their water and turned a deep golden brown, 10 to 15 minutes. (A browned mushroom will have infinitely more flavor than an unbrowned mushroom, because the water inside it evaporates and the flavor concentrates. So do not skip this step.)

3. Add 1/2 cup soy sauce, 1/4 cup vinegar and 8 cups of water. Bring to a gentle simmer and season with salt and pepper. Continue to simmer until the flavors have melded and the broth tastes good enough to drink (you will be drinking it), 15 to 20 minutes. Season with more soy sauce and vinegar as you like.

4. Meanwhile, cook the noodles in a large pot of salted boiling water until just al dente. (The timing will depend on the type and brand of noodles, so consult the package.) Add the noodles to the pot with the broth, and let them hang out in there for a minute or two to finish cooking and soak up all that flavor.

5. To serve, use tongs to divide the noodles and mushrooms among bowls, then ladle the hot broth over the top. Serve with the remaining chile, the herbs and the sesame seeds and oil (if using) for people to dress their own bowls to their liking.