Having seen the neurologist yesterday, Matt has now to go for an MRI on his brain – I forebore to make the crack that he didn’t have one. They really don’t seem to know what is wrong with him and there is doubt being cast on whether his TIAs were actually TIAs.

In common with most people, I get emails telling me I have a lot of money coming my way in

one form or another. However, yesterday I got a bit of a laugh from the one telling me the courier carrying $2.5 million US dollars was stuck at an airport with the box of money because he had lost my address and his ticket was about to expire. Poor fella.  Do they think people are that gullible? In fact are there people out there who are that gullible? I hope not. This picture reminds me of the Taco Bell Chihuahua who was trying to catch Godzilla. Did you see that ad? Used to crack me up.

Weird, driving home from the doctors’ yesterday I saw a man on a bicycle holding one arm in front of him, he had something wrapped around his wrist, I figured he had hurt it until I got closer. He had a snake curled round his wrist, I couldn’t believe it. Obviously I have no idea what kind of snake, but how very odd to go cycling down the road with a snake. Not as big as this one mind you.

Yesterday in London, there was a Lancaster bomber flying over and dropping

thousands of poppies in Green Park, escorted by Spitfires. It was the a way of memorialising the 55,573 members of Bomber Command who died in the Second World War. Oddly enough there was a programme about Lancasters on TV last night as well. Matt obviously was keen to watch it. I have mentioned before, they have a working Lancaster in Hamilton at the Canadian Warplane Heritage Museum – it costs a small fortune to ride in it though.

I thought this picture looked yummy and will certainly be trying it fairly soon.. I am not sure the combination of chicken and shrimp will appeal to Matt, but it sure does to me. 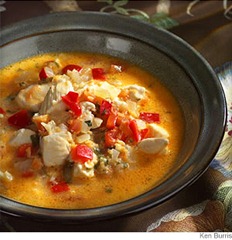