Unusual item in the news on Sunday, a fisherman has brought up a bright blue lobster, his dad caught one 40 years ago he says. Apparently the colour is due to a genetic deficiency. The fisherman is offering it for sale on Kijiji but only to 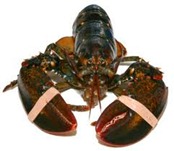 someone who will undertake not kill it and eat it. People have accused him of hypocrisy, but its part of his living to sell seafood; I would think a restaurant would enjoy having it on display. Even though lobster is probably my favourite food, I couldn’t cook it and eat it. Some readers may not be aware that a lobster, when alive, is not red, the shell turns that colour during cooking. Shrimp too of course. I must say, I wonder what colour the flesh of this blue lobster would be? Presumably the same as a regular lobster.

Back to those damned vicissitudes. Friday night I was trying to correct my watch

which was a couple of minutes slow (bad setting) and it turned out that the strap had broken – just split in half. I’d already had some trouble with the strap, now its totally buggered. Not an expensive watch, a Timex, but at least it gave me the date as well as the time; had alarms on it too, which I couldn’t hear anyway. Yes, my hearing is impaired, I have been thinking about getting a hearing aid – we have both been told that our hearing is not what it used to be, although Matt swears there is nothing wrong with his, its just that I mumble!!! So very typical. I remember an episode of ‘As Time Goes By’ with Judi Dench where her husband swore everyone was mumbling, in his case it was wax build up, sadly in our cases its age build up.

There was a large fly in the bedroom stuck between the screens and the glass. I

tend to go nuts about flies and then I thought what would I do if I still lived in the UK. Having lived here 37 years, I kind of take screens on the windows for granted. I cannot remember ever going anywhere in North America where there were not screens on the windows and doors. Having said that, there are no screens on the back doors of this building which are often left open because its where the garbage compactor is. I suppose that is why we get the occasional flies in the apartment – hadn’t thought of that before. We still don’t get

many, and of course all our windows and balcony door are screened. Dunno what they do in the UK these days, but I couldn’t bear living the way we used to without fly screens. Its bad enough when we get the little tiny fruit flies which can get through the mesh. I recently saw ads for some really good door screens which hangs in two strips with weights and close themselves magnetically once you have walked through them. Good idea if you are having a barbecue and need to walk back and forth with food. Or you have a dog. You can easily take them down for the winter and reinstall for the summer – according to the ad anyway.

We picked up my new reading lamp on Saturday afternoon. He adapted part of a

lamp he had in the store and used a couple of the shades from our original lamp. It works very well and Saturday night I could read very comfortably. Friday night I was trying to read with another light source and ended up with a crick in my neck. Very uncomfortable. It has, what I think are called, goose necks so you can point the light anywhere you want. As you can see, we are using CFL bulbs, we are gradually changing all our lights/lamps to those. We have been using a CFL in the kitchen for a long time now, previously we were forever changing the bulbs there. Our hallway was the same, the bulbs used to blow almost weekly it seemed. Not any more.

I was pleased to hear, first through Hilary Melton-Butcher’s blog that Prince Philip made it out of hospital in time for his birthday this weekend. From what I had been reading, as I blogged the other day, there were fears that things might be more serious than had been reported. Her Majesty carried on without him though, she had a lot to do.

Also on Friday, I turned 5 lbs. of stewing steak into about five meals of Steak Elizabetta which is a recipe I have had since the beginning of time and which I have always enjoyed. This is now separated into storage boxes and placed in the freezer. We actually bought more stewing steak on our last visit to Costco’s not realising we had lots anyway. Duuuh. Officially one should serve mustard dumplings with this recipe. They are delicious, but not really diet food. I haven’t actually made them in years because I always kid myself I am on a diet, well at least eating sensibly. Traditionally dumplings are made with suet, but when I was a young woman I didn’t have a lot of spare cash (do I now?) nor a way to store it, as I usually had butter, that’s what I used and they did taste really good made that way. The book, by the way, I have had since the ‘60s, it was my second cookbook and has been a wonderful ‘go to’ book ever since. There are colour plates in the book but of course this wasn’t one of them.

Cookery in Colour by Marguerite Patton 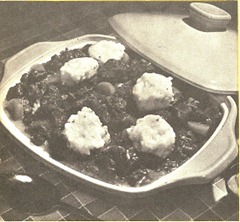 Coat the meat in the flour, seasoned with salt, pepper and mustard. (Best done in a plastic bag). Heat the fat in a pan, lightly brown the onions and then the meat. Add the carrots, stir in the water and vinegar and bring to a boil. Turn into a casserole, cover and cook in a slow oven (325°F) for 1 1/2 to 2 hours. 30 minutes before steak is ready drop dumplings on top of meat, cover tightly and cook for a further 30 minutes.

Sift together flour, salt and mustard. Add suet or rub in margarine. Mix to a dry dough with 3 – 4 Tbs. of cold water and shape into small balls. For 6 people.