Shortish blog for me today, so damned busy running around.

I finally made it yesterday for my echocardiogram. I eventually got in an hour late and as I was bowling in the afternoon, I was somewhat agitated. Not only that I think it is incredibly painful, as I told the guy, I think its more painful than a mammogram, he said a lot of women would disagree. Eventually we left and as I had made my lunch to take with me, I ate it in the car. We stopped at home for a few minutes and Matt gobbled his lunch; we picked up my balls and shoes and off we went. I made it in time. Whoopee. I proc

eeded to bowl pretty well, not brilliant, but pretty well, I was pleased with myself until a friend told me how well he had bowled, I became somewhat deflated. This friend used to be a fairly mediocre bowler, more like me, until a couple of years ago, then he took up lawn bowling. I don’t know enough about lawn bowling to understand, but since then his 5 pin bowling has improved by leaps and bounds. Obviously I need to take up lawn bowling!!! 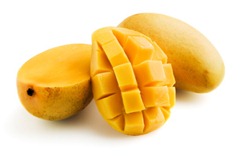 doctor for her diabetic clinic. Originally Matt was supposed to see his back surgeon Friday but they changed that til the following Friday so he still can’t bowl. I am sick of the damn doctors, I’ll tell you. After we can go pick up some more asparagus and strawberries. Yum.  I forgot to say I got some golden mangoes yesterday – I only discovered them a couple of years ago and I love them. Matt doesn’t find them so enjoyable. Funny I remember my father talking about mangoes when I was very little, he used to eat them when he was stationed in Rhodesia during the war. Please don’t ask me what Rhodesia is called today, I get totally lost with those names now. Never had mangoes when I lived in the UK and like I said, only recently discovered them here. That reminds me, I just worked it out this week, I have now lived on the North American continent for the same time as I lived in the UK. 37 years in each. Matt isn’t quite there yet. 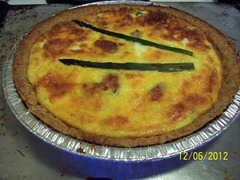 actually reading Pride and Prejudice, haven’t read it in a very long while and I am impressed with how close the British TV movie stuck to the book. Practically everything they said in the movie was taken from the book. Then I thought Quiche, so I got up and pulled some frozen pastry from the fridge, let it thaw, cooked it in the oven before filling it, took the two shells out of the oven and threw them on the floor. I could have cried. Especially as everything for the filling was ready. Luckily I still had another box of pastry shells so I had to start again. I took the precaution of getting Matt to take them out of the oven for me for the rest of the cooking.

1 lb. asparagus, cut into 1/2 inch pieces (trimmed if its not really fresh 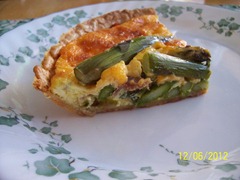 Preheat the oven to 400°F. Cook the asparagus in boiling salted water for a couple of minutes, tender but still firm. Drain and cool.

Cut up prosciutto into small pieces and then chop the asparagus. Reserve a few pieces for garnish.

In a bowl beat eggs and cream together and add salt to taste.

Put asparagus and ham in pie shells, top that with the cheese and then pour in the egg mixture. Bake uncovered in the 400° oven until firm, about 30-35 minutes. Let cool to room temperature before serving.