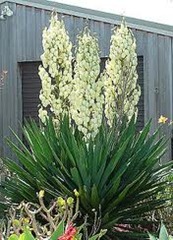 Saw a Yucca plant in flower the other day, we were driving by having been to the asparagus farm. I wanted to stop and take some petals to try them. If you don’t know what I’m talking about see my blog of Tuesday 19th, 2012.  I have always thought they were a very attractive plant, when in flower anyway, although the spiky leaves can hurt.

I am, once again, very impressed with Amazon.com. I ordered a watch from them on the 18th, they said it would arrive on the 20th, it actually arrived on the 19th. I think that’s fantastic service. Meanwhile, I paid an ambulance bill on June 4 and am still awaiting a receipt. They could take lessons from Amazon.com

Danish research is now saying light drinking during pregnancy will no

t harm the child. I gather this has not been endorsed by any other sources as yet. Matt’s youngest daughter stopped drinking when she was pregnant and hasn’t drunk alcohol since. Matt disowns her, she is the only one in the family who doesn’t have the odd tipple now and again. Useful for her husband though, never has to worry about drinking and driving. I don’t know how dangerous it was supposed to be, but prior to the experts saying pregnant women shouldn’t drink, thousands did so, I wonder how many had children damaged by that fact. I guess there are statistics. 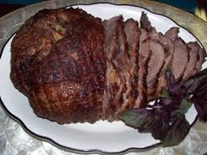 Yesterday we went to Costco for 2 things, we did fairly well, we only ended up with four items. Not too bad. All meat. Last time there we forgot to buy a roast of lamb which we like to have in our

freezer, also forgot some ground beef and had none at all in the house. That was one of the items we actually intended to buy. Also, Matt found some flat beans at the grocery store early in the morning, they were very wide ones, unusual here, but they still taste good. I think they will be saved for Saturday, we have friends coming to dinner on Friday but the beans “don’t go” with the planned meal.

Oh, don’t tell anyone, but I did so badly on Tuesday you would think I had never bowled before. I swore I would never go back. I will of course. That reminds me, Matt’s appointment with his back doctor has been postponed once again. However, they say he is unlikely to be allowed to bowl before 8 weeks is up anyway, this week is only 6. He is not a happy camper. Summer league finishes early August, so he won’t get much in, if any. He’ll have to wait til the winter league.

A discussion with a friend on FB made me think of this recipe. I only ever made it once, don’t know why, it was delicious. Today I would probably cheat and buy both my mincemeat and the pastry ready made. Much better if you have the time and ability to make your own. The mincemeat, for a start, would probably taste so much better. Do you remember Graham Kerr (pronounced car) The Galloping Gourmet? I used to watch him regularly for years, then his wife, Tina, had a heart attack and he went tee total and the programme was never as good nor was the food IMHOP. I think he might have been somewhat inebriated, to put it politely, in his earlier programmes but they were always such fun. By the way, the ground pepper on the berries really works, its delicious.

A punnet of strawberries to garnish
10 fI oz cream

First prepare the Mincemeat. Mix all ingredients for mincemeat together and moisten with brandy. Place in jars and seal. Make 1 month ahead (at least).
Pastry
Cut butter into small cubes, measure flour and sift. Separate egg.
Now assemble
Make well in the sifted flour and place the butter in the well. Add egg yolk, sugar, salt and 2 tbsp water. Combine all ingredients except flour with fingertips, then work in flour, adding iced water as needed. Knead several times and place pastry on plate and let it rest for an hour or so in the refrigerator.
Roll out half pastry to fit a 10-in, pastry ring. Prick with a fork and cut round of greaseproof paper, place in pastry case, fill with dried peas or rice. Prick base once again and bake pastry blind in 400°F. (Reg.. 5) oven for 15 minutes. Remove paper and rice and allow pastry case to cool.
Fill cooled pastry shell with mincemeat. Roll out remaining pastry for cover, crimp edges and glaze with egg yolk. Place in 400°F. (Reg. 5) oven for 30 minutes until golden-brown.
Remove pie from oven and cool. When cold cover with whipped cream and cover the entire surface with strawberries.
Servings: 8-10
Tips
Try a little freshly ground pepper on the strawberries. Helps to bring out their flavour.