I have been familiar with the works of this humourist since childhood, but I had never seen this monologue before. Being a devotee of asparagus, I couldn’t resist sharing it with you. Its quite long, but I do hope you will read and be amused by it.

Mr. Ramsbottom went to the races,
A thing as he'd ne'er done before,
And as luck always follers beginners,
Won five pounds, no-less and no-more.
He felt himself suddenly tempted

To indulge in some reckless orgee,
So he went to a caffy-a-teerer
And had a dressed crab with his tea.
He were crunching the claws at the finish
And wondering what next he would do,
Then his thoughts turned to home and to Mother,
And what she would say when she knew.
For Mother were dead against racing
And said as she thought 'twere a sin
For people to gamble their money
Unless they were certain to win.
These homely domestic reflections
Seemed to cast quite a gloom on Pa's day
He thought he'd best take home a present
And square up the matter that way.
' Twere a bit of a job to decide on
What best to select for this 'ere,
So he started to look in shop winders
In hopes as he'd get some idea.
He saw some strange stuff in a fruit shop
Like leeks with their nobby ends gone,
It were done up in bundles like firewood-
Said Pa to the Shopman, "What's yon?"
"That's Ass-paragus-what the Toffs eat"
Were the answer; said Pa "That 'll suit,
I'd best take a couple of bundles,
For Mother's a bobby for fruit."
He started off home with his purchase
And pictured Ma all the next week

Eating sparagus fried with her bacon
Or mashed up in bubble-and-squeak.
He knew when she heard he'd been racing
She'd very nigh talk him to death,
So he thought as he'd call in the ' Local'
To strengthen his nerve and his breath.
He had hardly got up to the counter
When a friend of his walked in the bar,
He said "What ye got in the bundle?"
"A present for Mother," said Pa.
It's 'sparagus stuff what the Toffs eat "
His friend said "It's a rum-looking plant,
Can I have the green ends for my rabbits?"
said Pa "Aye, cut off what you want.
He cut all the tips off one bundle,
Then some more friends arrived one by one,
And all of them seemed to keep rabbits
Pa had no green ends left when they'd done.
When he got home the 'ouse were in dark ness,
So he slipped in as sly as a fox,
Laid the 'sparagus on kitchen table
And crept up to bed in his socks.
He got in without waking Mother,
A truly remarkable feat,
And pictured her telling the neighbours
As 'twere 'sparagus-what the toffs eat.
But when he woke up in the morning
It were nigh on a quarter to ten,
There were no signs of Mother, or breakfast
Said Pa, "What's she done with her-sen?"
He shouted "What's up theer in t' kitchen?"
She replied, "You do well to enquire,
Them bundles of chips as you brought home
Is so damp... I can't light the fire."

the father in My Fair Lady – Get me to the church on time, see the picture). When I was a youngster, I used to do Marriott Edgar monologues as kind of party pieces. One of the most famous to the English used to be Albert and the Lion which I can still recite after all these years. Another one I loved was about the Magna Carta and yet another about the Battle of Hastings. If you are interested in following them up, they are here. 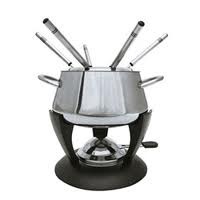 We have friends coming over for dinner this evening, so I have lots of preparation to do. We have decided to do a fondue which entails a lot of chopping although not actual cooking. I decided not to do a cheese fondue as one of our friends is not a big eater and with everything else there should be plenty to eat. Steak, fondue meatballs, shrimp, mushrooms, cauliflower and a side salad and then a dessert of cheesecake and strawberries. I am tossing up whether to do the Triple Hot Coleslaw (June 14, 2012 blog) or a regular salad of lettuce and tomatoes etc.

Funny, making the meatballs, one needs to mix them by hand. I wear a Medic Alert bracelet and was worried about getting it in the meat – I am unable to take it off – so I Scotch taped it higher up my arm so it wouldn’t fall down. 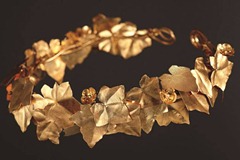 London at the Goldsmith’s Hall through the summer, the link will take you to her blog and the next link to an article in the London Evening Standard which also has a video about the exhibition. There are pieces on display which are around 4,000 years old. To quote the Evening Standard, "Gold, Power and Allure" aims to tell the rich story of Britain and its relationship with gold, through a display of more than 400 gold items and artifacts. They have some wonderful items many of which are on loan from various places including private ownership which have never been on display before. There is a mechanical mouse in gold and pearls amongst other delightful pieces. The piece in this picture is a modern tiara depicting gold ivy leaves interwoven with buttercups. Beautiful. The video is really worth taking a look at. Thanks Hilary for drawing my attention to this. I just wish I could go to the exhibition, it sounds fabulous and enough to tempt any enterprising thief. Oceans Eleven anyone? Hilary also mentioned that it was Prince William’s birthday yesterday, I had forgotten. 30 yrs. old, oh to be so young.

I mentioned the meatballs I have made for the fondue tonight. I got this recipe from a friend many years ago and although I am not a big fan of meatballs, I have always enjoyed these fried in a fondue pot. They are simple enough to make although for fondue it is advisable not to make them too big. I think it’s the Worcester (pronounced Wuster) sauce which gives them their special flavour.  Hmm, looking at this picture, I wonder if I made them too big. There are two layers by the way. 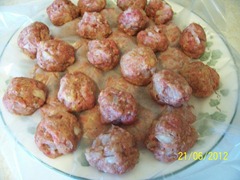 1. Mix, shape, refrigerate. Take out of fridge 15 minutes before serving for Fondue.