Is sitting down to urinate healthier for men? Swedish groups (labelled as feminist) are maintaining that urinating standing is less healthy for men. They are trying to introduce unisex toilets maintaining it is healthier all round and will help to eliminate prostate problems and prolong a healthy sex life. Swedish politicians are arguing about this at the moment. I notice a couple of comments anti unisex toilets, the French and Belgians have had unisex toilets for  years. I remember it shook me the first time I discovered this when I was about 16. I’ve told this story before, but I was wandering around the bar with a beer in my hand looking for the necessary. I found it, saw a long tiled shelf area so put my beer down in it. When I had done what I came to do, I came out of the toilet and found out just what this tiled area was for. Needless to say, I picked up my beer and then left it on the nearest table. A year or two later we were in Belgium and a young English soccer team were over there; they were horrified when a friend and I walked into the toilet where they were relieving themselves. It was funny really.

found dead in their hotel room on an island in Thailand. At the moment no-one is quite sure what happened to these women but there is speculation that they were poisoned. There were rashes on their skin. Seems they hadn’t been there very long – they checked in on Tuesday, didn’t answer the door on Thursday and were found on Friday. Autopsies are being performed of course. The women were young, 20 and 25. This is a picture of the beach at the Phi Phi Palms residence. Looks a beautiful place to stay, not one you would associate with death.

The Japanese government have approved restarting a nuclear reactor for the

first time since the earthquake and tsunami last year which led to a nationwide shutdown. The public is  basically opposed to using nuclear reactors after the near disaster with the Fukushima Dai-Chi plant; all 50 reactors were taken off line for maintenance and safety checks. The government appear to be concerned that there will not be nearly enough power to cope with the high demands of the summer. It is a problem in as much as Japan is prone to earthquakes and reactors being, of necessity, by the water, are vulnerable to tsunamis.

I’ve been hunting around for steak sauces and Saturday night I tried out a new one from cooksunited.co.uk which we enjoyed. Silly me forgot to take a picture and there isn’t one with the recipe. However, the picture I have found looks very much like the final product. I proceeded slightly differently by melting the butter in a pan and adding the flour to make a roux. I used 1 tsp. Coleman’s mustard and I think I should have used at least half as much again. It was a delicious sauce though and we both enjoyed it.

(This is supposed to be an individual portion, but was plenty for both of us.) 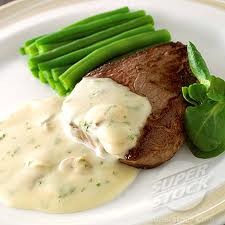 salt and pepper, to taste

Mix butter and flour until well combined and then spoon into a saucepan.
Stir in a little milk, and then some cream until desired sauce consistency.
Add minced garlic and add the beef stock cube. Cook over low heat until stock cube dissolves.
Stir in lots of mustard and black pepper.
About 5 minutes before serving add a bit of whiskey and Worcestershire sauce.
Pour over steak.