Saturday morning we heard that the Queen had gone to the Derby which marks the start of the Jubilee weekend – wish I were there, I love the Derby –  the Queen has never won the race and didn’t have a horse running this year. Of course there were lots of comments on GMA about the Queen’s accession 60 years ago plus pictures of her in Africa when she was told her father had died and she was now queen. I remember all this. Then I looked at the anchors who were talking on the TV and

thought, not one of them would have been alive at the time of her ascension to the throne. It then occurred to me that a lot of my blog readers wouldn’t have been alive either. At the time I was at boarding school in Herne Bay and Matt was an apprentice at the dockyard in Chatham, we didn’t meet for many years after even though we lived close by for a long time. I remember February 6, 1952 when the king died and that I wanted to wear my George VI plaid dress but wasn’t allowed to, I had to wear my school uniform. I figured the plaid was a mark of respect. Why I had a dress in this tartan I have no idea.

that time, was the picture of three queens at the graveside which, as they pointed out, was a very rare occurrence and was unlikely to happen again. From left to right you have Queen Elizabeth II, Queen Mary, her grandmother, and Queen Elizabeth her mother, this picture was from February 9, 1952. Queen Mary herself died the following year at the age of 85. I have just discovered she was Mary of Teck something I had never heard of before. Was just reading a bit about her on Wikipedia. I’m not the world’s greatest historian by any means. Hated the subject at school because I found it boring the way it was presented in those days. Do check out the Wikipedia article, there are some lovely pictures of an attractive young princess in the dress of her time and then of her in later life as consort to the King of England. 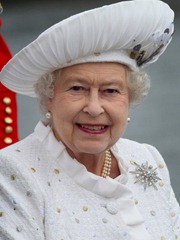 Elizabeth II ranks amongst one of the longest living monarchs although so far Queen Victoria beat her by three years. I just found a list on Wikipedia which is interesting, not sure who some of them were though, like Llywelyn of Gwynedd, presumably Welsh. Oh, apparently king of Wales for 40 years. I suppose he counts as a British monarch.

I religiously watched the pageant from 9:30 a.m. til shortly after noon. I was both impressed, moved and disappointed. Once the flotilla got to the Avenue of Sail as they called it, there were no pictures shown of the ships waiting there, there were some tall ships and I could just about see some Thames Barges through the rain. None of the ships or barges had their sails unfurled which is when they look more impressive of course. Everyone looked great although I

felt sorry for the Queen, she was obviously freezing and went below at one point and donned a shawl. I wondered if she had donned any warmer clothes underneath her ensemble. If not, I bet she wished she could have. Katherine, Duchess of Cambridge, seemed to be coping with the cold and was dressed in brilliant scarlet – she stood with her husband, Prince William who was dressed in RAF uniform and Prince Harry who was also in uniform, I am insufficiently knowledgeable to say what it was though. They travelled down river on The Spirit of Chartwell which is privately owned and was dressed up for the 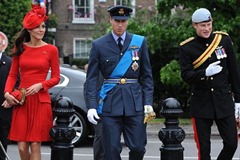 occasion. The gold on the bow is extremely aggressive looking dolphins, not like the gentle creatures we are familiar with. They are apparently a symbol of the Thames. What really impressed me was that Prince Philip, 91 and Queen Elizabeth, 86, stood for a minimum of 2 1/2 hours waving and being on view. Tees me off, I can’t stand for 20 minutes. Sadly the weather did not cooperate and it was dull and grey 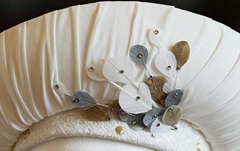 most of the time and then eventually decided to rain, but that didn’t seem to deter the million or so people watching the flotilla pass by. There are a number of pictures on this News of the World site, a couple of which I have borrowed. There are more super pictures on this Metro page including the detail on the Queen’s hat which I was wondering about. An interesting footnote, the whole pageant was paid for by private subscribers, the government didn’t pay anything although no doubt they footed the bill for the security. One ship along the river was the HMS Belfast, a cruiser, which Matt was delighted to see as he worked on it when he was employed by Chatham Dockyard a year or two, or three, ago.

Funny, I spoke to one of my customers during the morning and she said she was sitting close to the window to watch the Snowbirds with the TV on where she could see the Pageant. Generally Canadians love the monarchy and pageantry of the British Royal Family. There was a contingent of 1,000 anti royalists alongside the river we were told, but we saw nothing of them. Destroying the monarchy would mean destroying one of the biggest tourist attractions Britain has, whatever else you think of the Royal Family.

Being very interested in food, it occurred to me, there was a dish called

Coronation Chicken invented 60 years ago, I wonder if someone will invent a Diamond Jubilee chicken. So, having mentioned it, I have to include it as my recipe for today. I had no idea it was a recipe by Rosemary Hume; I have a 1966 copy of the book written by Rosemary Hume and Constance Spry. My mother also had a copy and loved the recipes but then everyone voted her a better cook than me. Actually I only ever ate this dish once, it was made by a very good friend of mine for a lunch that I attended in company with a bunch of ‘cooking’ friends some years ago. It is delicious. This picture I had to include, its so cute, its actually a Jubilee cake.

The dish was served at the Queen’s Coronation lunch in 1953 Photo: ANDREW CROWLEY

The famous coronation chicken served at the Queen’s coronation lunch is usually attributed to Constance Spry. Popular lore has it that Spry based the recipe on its similarly rich and spicy royal relation, jubilee chicken, prepared for the Silver Jubilee of George V in 1935, which mixed the chicken in mayonnaise and curry.

However, it was Rosemary Hume who was actually behind coronation chicken, the recipe for which went on to appear in the first edition, in 1956, of The Constance Spry Cookery Book and is indeed still to be found in the modern 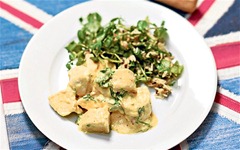 “One would not venture to serve, to a large number of guests of varying and unknown tastes, a curry dish in the generally accepted sense of this term,” wrote Spry. “I doubt whether many of the 300-odd guests at the coronation luncheon detected this ingredient [curry powder] in a chicken dish which was distinguished mainly by a delicate and nutlike flavour in the sauce.”

Poach two young roasting chickens with carrot, bouquet garni, salt and peppercorns in water and a little wine, as well as enough barely to cover, for about 40 minutes or until tender.

Allow to cool in the liquid. Joint the birds, removing the bones with care.

Salt, sugar, a touch of pepper

• Add purée, wine, water and bay leaf. Bring to boil, add salt, sugar to taste, pepper, and the lemon and lemon juice. Simmer with the pan uncovered for 5-10 minutes.

• Strain and cool. Add by degrees to the mayonnaise with the apricot purée to taste.

• Adjust seasoning, adding a little more lemon juice if necessary. Finish with the whipped cream. Take a small amount of sauce (enough to coat the chicken) and mix with a little extra cream and seasoning.

• Mix the chicken and the sauce together, arrange on a dish, coat with the extra sauce.

The rice salad which accompanied the chicken was of rice, peas, diced raw cucumber and finely chopped mixed herbs, all mixed in a well-seasoned French dressing. For convenience in serving at the Coronation, the chicken was arranged at one end of an oblong dish and a rice salad at the other.