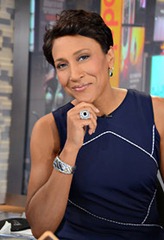 announced that she has bone marrow disorder, MDS, due to some of the treatment she underwent for breast cancer a few years ago. The doctors are beginning to give her a number of blood tests and luckily it has been discovered her sister has an almost perfect marrow match so she can act as donor for the replacement when it happens. Apparently this is a very rare disease but Robin is determined to beat it supported by her friends (family) at GMA. I too was getting a bit tearful watching her make the

announcement. She says Dr. Richard Besser, the medical expert on GMA these days, had been holding her hand all the way through this, she found out in the early spring. Josh and George were holding her hands during the announcement and Josh sounded ready to cry himself. Both Diane Sawyer and Robin’s sister were present whilst she made the announcement. Robin Roberts is very much beloved by her co-workers and her audience. Matt and I wish her well. When you hear things like this, it puts your own problems into perspective doesn’t it?

Matt is a tad annoyed, talking of medical things, he was supposed to see the surgeon for a follow up on his recent back surgery this Friday and it was postponed til the following week – he was so hoping he would be able to start bowling soon. The summer league being so short he isn’t going to be able to get a lot of bowling in before the end.

Having mentioned Prince Philip yesterday, I got a comment from loverofwords mentioning DNA testing using the Prince’s DNA to establish whether the woman 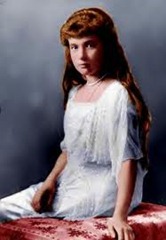 claiming to be Grand Duchess Anastasia was genuine or not. I had never heard anything about this so of course I googled. What I found was a report in the Los Angeles Times from 2009 detailing the fact that they had now established that all of the Romanov family had been found in two graves, this had been conclusively established with DNA testing. If you are able to follow the science it appears that the Mitochondrial DNA of Prince Philip is closely related to some of the Romanovs, hence comparisons help to rule out any false claims. I am so sad, I always liked to believed Grand Duchess Anastasia had survived – of course I like the version where she runs off with Yul Brynner, LOL

As you will know, I love shrimp and when I saw this recipe I immediately thought ‘this is one for me’. I would always peel the shrimp before cooking them, this way you can also clean them. The only variation I wouldn’t like would be adding canned tuna. No thank you. I recently read a tip on boiling shrimp which is a good idea for those who are unfamiliar with cooking them. If they look like a C they are done if they look like a O they are overcooked.

You'll want to gobble up these succulent morsels immediately, but patience will be 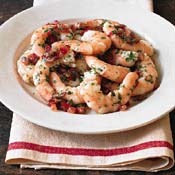 rewarded; the shrimp taste better the longer they sit in the marinade. Leave them for a couple of hours, if you have the time.
INGREDIENTS

1 pound large shrimp, in their shells

Bring a large pot of salted water to a boil. Add the shrimp, cover, and bring back to a boil. Continue boiling, partially covered, until the shrimp are just done, 1 to 2 minutes. Drain. Let the shrimp cool and then peel them.

In a large glass or stainless-steel bowl, combine the lemon juice with the olive oil, tomato, salt, pepper, and parsley. Add the shrimp and toss.

*Substitute a pound of sea scallops for the shrimp. Heat one tablespoon of oil in a large nonstick frying pan over moderately high heat until very hot. Season the scallops with one-eighth teaspoon salt. Put the scallops in the pan and sear until brown on the bottom, one to two minutes. Turn and brown on the other side until just done, one to two minutes longer. Remove the scallops and cut them into quarters. Toss with the marinade.
*Spice up the dish by adding one-quarter teaspoon dried red-pepper flakes to the marinade.
*Use chopped fresh basil instead of the parsley.
*For an extra flavor dimension, add a clove of minced garlic to the marinade.

*Use halved and pitted olives in addition to or instead of the capers.
*Add a sprinkling of chopped fresh basil.
*Toss in a chopped tomato.
*Use three chopped anchovy fillets instead of the paste.
*Add a small can of drained tuna.