Wallenda Does It, Snopes

I said to Matt, yesterday morning, I wonder if Ni 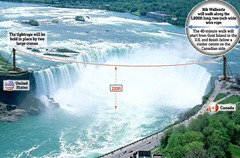 k Wallenda is carrying his passport, Matt told me that one of the GMA anchors had asked that question and the reply was “yes, I’ve got it on me” – I wonder if the Customs and Immigration really would make a fuss about that. By the time this is posted, it will all be over and done with. Friday was constant news on all media that he was 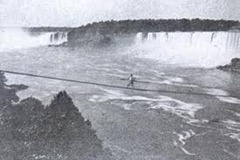 feeling calm and collected. That he wouldn’t be eating much and that he would be spending the day with friends who had come to Niagara to support him. Sam and Josh from Good Morning America commented that he seemed very laid back. I hadn’t realised before that when Blondin did the walk, it wasn’t directly over the falls like Wallenda’s walk was. Although this was done in the dark, Nik Wallenda still had to cope with the spray from the falls which is constant. But it was the swirling winds in the mist area which were the most difficult apparently. What is interesting to me, the Blondin picture was taken in 1859 – look at the difference in the curve of the falls in 153 years – the river has certainly carved out a chunk since those days. The flow is reduced in the winter because of its use for hydro electric generation,  but even so, the water still thunders over the falls. I think they allow more water to flow during the tourist season. I haven’t done the touristy bit for years, but we went behind the Canadian falls several times and went out on to the platform just below them. Very impressive.

Well, if you were watching, you will know he did it. He wasn’t happy having to wear a safety harness and I must say it didn’t look all that safe to me, I figured it could 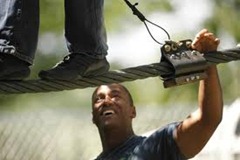 snag and drag him off. Harness or no, it was still wonderful to watch and I was sitting on the edge of my seat. Especially when he said he was getting tired during his run home. His hands were beginning to numb as well. One could hardly see him when he walked through the mist and he was soaked to the skin but he made it. Way to go Nik Wallenda, I was thrilled I was there to watch history in the making (Matt went to

bed) and to see something which may never happen again. It took two years to convince both the US and Canada to allow him to do it and then to make all the necessary arrangements. Did you see them ask him for his passport? They even stamped it for him. There are all kinds of information and lots of videos on the linked site. This is a Canadian Press picture of him over the falls. Dunno if I sound excited, I am, I can assure you.

I do wish people would check things with Snopes before they forward them on to others. I constantly get emails with good ideas, things to do for security, missing kids, etc. etc. and when I check them they are false or way, way out of date. It should be mandatory that every new computer user should be taught about Snopes and have a button for them on their browser.

This is a recipe we tried on Friday night. It is fairly simple but the chops came out moist and tasty. We had some chicken stock in the fridge so that is what we used.

1. Combine the salt, sage and black pepper in a small bowl and rub on both sides of the chops. Melt the butter or margarine in a large skillet over medium high heat and sauté the chops for 5 minutes per side, or until well browned.

2. Meanwhile, in a separate small saucepan over high heat, combine the water and the bouillon and stir until bouillon dissolves (or use pre made stock). Add this to the chops, reduce heat to low, cover and simmer chops for 45 minutes.

Author Notes
"Pork chops rubbed with a pungent seasoning of dried sage, salt and pepper are pan fried in butter until golden brown then simmered in a simple beef bouillon."