To all Canadians, Happy Canada Day on Sunday. The flags are already flying everywhere. 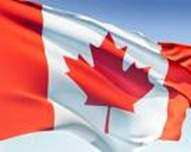 Matt got the all clear to bowl when he saw the doctor at the fracture clinic yesterday which will make him happy.

The night before that, we had electrical troubles in our main bedroom again. I

hadn’t been in bed very long when I heard a popping noise. It turned out to be the answering machine being turned on and off by the electricity, weird. It also turned out that the alarm clock was playing up as well which concerned me as we had to get up early to be at the fracture clinic. Eventually I rousted out an old hand cranked travel alarm and set that, but then I lay awake for a long time worrying about whether it would wake us. It also occurred to me that there could be an electrical fire. I had unplugged everything of course. Electricity is known as hydro here by the way. With the result by the time 6 a.m. turned up I had had very little sleep and am now dying on my feet. It turns out that because it’s a holiday weekend the electrician had already gone away for a long weekend so no clock until next week. I wondered what would happen if the power in the whole building went out? At least this time the lights are still working, no idea why. The whole thing is very odd.

There is no way I can plug in the answering machine anywhere else, no room, so I have ended up getting one set up through the phone company. I’ll see how that works. Maybe when they fix the power in the bedroom I’ll go back to the machine, I’ll see. Its those vicissitudes again!!!

Ooh, whoopee I have just discovered we pensioners get an increase of $4.86 a

month on Canada Day, in fact there is a scale of fees listed as happening that day. I wonder if the retired ministers who get very large pensions, get these increases as well? Oh yes, the MP’s pension fund is going to increase considerably by $23M. There are some new rules on refugees and immigration which will be coming into effect that day too. There have been lots of protests about benefits paid to immigrants compared with pensions from people who have worked for them.

Here’s something a bit different. Might try this, I tend to enjoy things which are pickled. 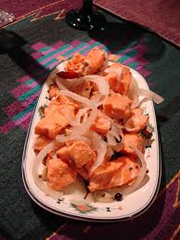 Pour water into a large saucepan to a depth of 2-inches. Add 1 1/2
teaspoons pickling spice, salt, and lemon; bring to a boil. Cover,
reduce heat, and simmer 10 minutes. Add salmon and shrimp; simmer 7
minutes or until fish flakes easily when tested with a fork and the
shrimp are done. Drain fish mixture, discarding cooking liquid and lemon
slices. Let cool.
Remove skin and bones from fish; break fish into bite-size pieces. Layer
fish, shrimp, and onion rings in a 1-quart jar.
Combine 1 1/2 teaspoons pickling spice, vinegar, vermouth, sugar,
capers, peppercorns, and bay leaf in a saucepan; bring to a boil. Reduce
heat; simmer 1 minute or until sugar dissolves. Pour over fish mixture
in jar. Cover and chill several hours or up to 5 days. Serve with salad
greens, crackers, or other vegetables on an antipasto platter. Makes 8
servings.
Serve with marinated vegetables, cheeses, olives, breads, and/or
crackers.

Have a great holiday weekend.