Breakthrough which is being offered by Amazon.com for two days as a free download. Today is the second day. I got my copy yesterday, I already have book 2 which is Opening so I am looking forward to reading them. The books sound very exciting – full of wormhole technology and a discovery seeker called Chase Manhattan who doesn’t want to do anything but settle down as an associate professor of physics. The blurb sounds good to me. I understand it can be downloaded for both Kindle and for an iPad.

I guess I am a bit behind the times, but I was reading a book, one of a series about Detective

Stephanie Chalice by Lawrence Kelter, and the book described the heroine as going into an area where she was probably the only person not wearing a doo rag. What on earth, thought I, so of course I had to Google. Here is the information according to Wikipedia. I had, of course, seen these worn, in fact there is a guy in our building who wears one, I just didn’t know what they were called. I cannot really believe they are worn, these days, to protect hair dos!!! If so, there are a lot of very fussy men around .

I have discovered that some of the trouble I have typing on my laptop is caused by brushing the touchpad on the keyboard. The cursor starts jumping all over the 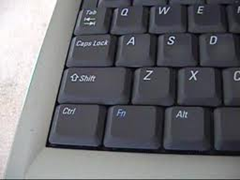 place and even decides to delete lumps of text without my permission. Aggravating to say the least. Then I discovered one can disable they touchpad. Finally I discovered that I could do this by holding down my FN key and pressing F9. Didn’t work. I phoned Toshiba and talked to them. They now tell me that the software for my FN key isn’t working and they would have to charge me to trouble shoot. I don’t think the FN (function) has ever worked; never had occasion to use it and didn’t really know what it was for, but I have depressed it once or twice since I have had the laptop and no menu has ever appeared which is what is supposed to happen. So, rather than pay Toshiba, I have called my trusty computer repair man.

By the way, did you hear Wallenda wants to cross the Grand Canyon now?

They kept saying he was wearing shoes which had been made by his mother and it sounded as though they were made of elf skin. I knew that wasn’t possible, much as I like to read fantasy books, and I finally found out that it was elk skin. I wonder why elk in particular? Gotta do some more research. I have found an article from Natural Running Centre which talks about the elk skin soled shoes

which Nik was wearing and why. There was a lot on TV about the balance points on one’s feet and the elk skin enables the feet to feel the walking surface almost as well as bare feet which would, of course, have been unable to maintain the grip on the wire. More science to this stuff than one realises. I noticed that he spent time, prior to his walk, kind of roughing up the leather on the soles. Helps with the extreme wetness he experienced when he went through the Mist.

Well I’m damned. When we lived in North Carolina the place abounded with Yucca plants. I have seen them here too, but not as many. I have just discovered that parts of them are edible. This page tells you how to eat Yucca, you can apparently eat the petals raw, you can harvest the fruits after they have flowered too. The reason I found all this out was because I received a recipe in my email the other day which came from Cooking.com which immediately peaked my curiosity. It appears that not all yucca are edible, there are different varieties. I guess you have to know which is which. Now I have to investigate how you tell. 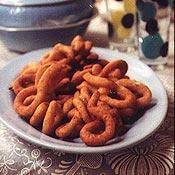 These simple fritters are a favorite Cuban snack.
INGREDIENTS

Put yucca and sweet potatoes in a medium pot and cover with cold water by 2-in. Bring to a boil over medium high heat and cook until soft, about 20 minutes. Drain, then mash with a potato masher until smooth, discarding any fibrous pieces. Set aside until cool to the touch, then add yolk, salt, aniseed, and 1 teaspoon of the oil.

Rub hands with a little oil, then form dough into 1-in. balls. Roll each ball on a lightly floured surface into 8-in. ''ropes'', then twist into open bottomed figure eights.

Put sugar, cinnamon and 1 1/2 cups water in a medium saucepan and simmer over medium heat until pale gold, 40 to 50 minutes. Set syrup aside.

Pour oil into a large skillet to a depth of 2-in. and heat to 375 degrees F on a candy thermometer over medium high heat. Fry buñuelos in batches, turning them, until golden brown, about 2 minutes. Drain on paper towels. Serve warm, drizzled with a little syrup.