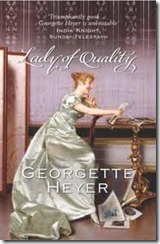 Reading a story, which I have just finished, I felt compelled to talk about books 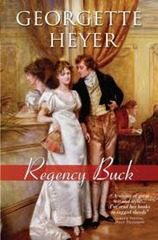 which are written in the Regency period. Jane Austen was, of course, the leader of all stories written at that time, followed closely, in my opinion, by Georgette Heyer. Both women wrote romances, basically about the upper classes of that time period. A lot of modern romance writers think its fun to set their stories in the Regency Period but don’t seem to have a clue about the morality of that age. That is the beauty of Jane Austen, she wrote about the time she lived in and habits of the people lived with, so she knew what she was talking about. The story I have just read had a young duke and a vicar’s daughter romping around in the grass – admittedly they intended to get married, but that’s not the point – he was a gentleman and she was a lady and neither would have dreamt of doing such a thing prior to their wedding. The 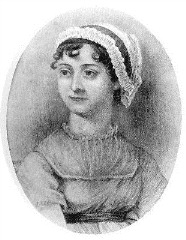 morality of the period would have meant they were bred up to not even consider anything remotely like that, and even if they did consider it, there was no way they would have been allowed to be together, alone, long enough for such a thing to happen. Gentlemen of the period did have their flings of course, but not with young, unmarried women of their own class. So if you read a story like that, sorry, that ain’t how it happened. I am not saying people didn’t end up romping in the grass, but NOT young ladies of quality. In those days they were very much cabined, cribbed and confined. Reputations were very important and keeping up with the ton was the be all and end all of a genteel young lady’s existence even if she lived far away from London society, one hint of scandal and she was ruined and very unlikely to make a good marriage because of it.

I notice yesterday, there wasn’t much reaction to the banning of plastic bags in Toronto. I think we should start a lobby to ban plastic bags everywhere. The ones we already have are going to be kicking around for the next 300-1,000 years, mostly in garbage islands in our no longer pristine oceans

I have lifted this recipe and pictures wholesale from Viveca’s My Guilty Pleasures – she said I can take any recipes she shares – and I love fresh sardines although we don’t get them a lot in Kitchener. They are readily available in Cambridge which isn’t too far away. Cambridge has a large contingent of Portuguese people and that is why one can buy sardines. I am not talking canned sardines, but the larger fish which we were taught to put on the barbecue by our neighbours many years ago. They are absolutely delicious. Actually thereby hangs a tale; many years ago, my parents sailed from England to live in the Mediterranean and called in at several ports in Portugal on their way past. Where they stopped in Portugal 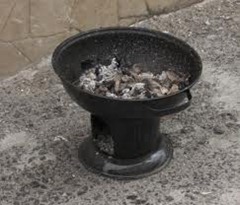 they discovered people cooking the sardines on small barbecues (bit like a Hibachi) outside their front doors. They bought one for me which I had for many years but never used. Unfortunately it got dropped and being cast iron, fractured so I had to throw it away. Eventually we emigrated and discovered fresh sardines through our neighbours and could have used this sardine cooker which I no longer had. Typical. Our neighbours, by the way, were staggered that we would eat these fish, why not, they were delicious. They would serve them with new potatoes and a hot sauce she made herself with a combination of bell peppers and chili peppers. Fiery, but wonderful, especially on the potatoes, wish I knew how to make it. I borrowed this picture from www.foodfun.blog.co.uk being the only picture I could find of the type of grill I once owned. 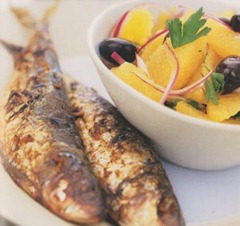 1. Mix the garlic with the spices, lemon juice, olive oil and seasoning. Rub the mixture all over the sardines to coat thoroughly and set aside while doing the salad.

1. Peel and segment the oranges, discarding all white pith, membrane and pips, place in the bowl with the thinly sliced red onion, torn parsley and black olives. Season with salt and freshly ground black pepper. Drizzle with a little olive oil.
2. Preheat the grill, place the sardines on the rack and grill for about 2-4 min on each side until cooked through. Serve with the salad, some crusty bread and a chilled crispy white.