Friday was what you might call, a day of vicissitudes. One of the main parts being that the night before the the tree lamp, which we have had for years, and which is my primary source of light when I read, having been somewhat overhandled, decided to quit working properly. So today, having found a lamp repair guy in the next town, we went there, then couldn’t find him. It turned out he was tucked in behind the stores on the main street. By the time we finally discovered that I had done a lot of walking which, for me, is somewhat painful to put it mildly. To get to his workshop one has to descend some steep steps without much in the way of handholds. The upshot of all this, he figured the lamp wasn’t worth repairing and said he could build me a new one which would only cost a little bit more. Have to go back this afternoon to get it. He wanted a deposit, but as we don’t carry cash or cheques, he decided we were trustworthy looking. This picture is the nearest I can find to our old one. I guess it doesn’t owe us anything, we have had it a loooong time. In fact these apartments are fitted up with hooks for swag lamps which went out of fashion at least 30 years ago. Pity in a way, there is a hook right above where I sit and read.

Such a pity, there is a horse called “I’ll Have Another” which was all set to win the American Triple Crown – the last race of which, the Belmont Stakes takes place this weekend – but has now got an injured leg. In fact I now read that he won’t ever race again, what a disappointment having won both the Kentucky Derby and the Preakness Stakes and being all set to win the final jewel in the crown. The last time there was a Triple Crown winner was in 1978. The vet said he had the start of tendonitis in the left front tendon. Doubtless he will now be put at stud and earn a lot of money for his owners. Just had a thought, the Queen is a great racing enthusiast, I wonder if she follows American racing?

take place. This happens to celebrate her official birthday in June, this year June 16. Her actual birthday is in April. Once upon a time The Queen attended this ceremony on horseback, these days she sits in an open carriage. This is a busy month for her with the Jubilee celebrations and her birthday as well. We hope Prince Philip will be able to join in, its his birthday this weekend too. I have just read a report saying that it is actually unknown just how ill he is and that he may not be out of hospital for his birthday. The Queen is hosting a garden party at Sandringham next week but it is not known if he will be there either. There has been lots of protest because the Royal couple were left standing in the cold and rain for 4 hours last week, but as far as I am aware, that would not induce a bladder infection.

I had some leftover fresh salmon steak (we didn’t do a whole salmon, but the steaks were huge) from my supper the other night and then Food and Wine kindly posted a good recipe for using it up. I had to adapt somewhat, didn’t have any bacon and I used lettuce although I bet watercress would have been delicious, but next time…… 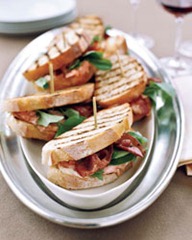 One of the great things about roasting a whole salmon is that there are usually leftovers. Love uses any extra fish in his exquisite riff on the BLT, layered with bacon and watercress. The sandwich would be equally good with another roasted fish, such as bluefish or cod.