The other night we were talking about Ontario Driver Tests once you reach 80. We knew there was a written test and no hands on driving test (which I think is wrong) so I decided to Google about it. Obviously you have to know the law for driving on the roads of Ontario, but why, please tell me, do you have to know what the fines and penalties are? Isn’t that what the law courts are for? It is the same for any drivers’ test here, you have to have a written test and you have to know the fines and/or punishments. That seems absolute rubbish to me. If you know something is wrong or criminal that should be sufficient. Do they think knowing the penalties will deter you from wrongdoing?

Tonight one of the Wallenda family, Nick, 33, is planning to do his walk across 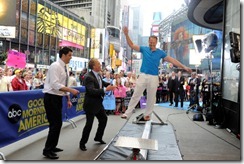 Niagara Falls. I don’t know what the TV picture will be like, but I plan to watch if possible. They had a low wire set up in Times Square and the hosts of Good Morning America all tried walking the wire without much success. Then Sam

Champion, the weather man, tried trapeze but found he wasn’t too good at that either. He had all kinds of safety belts and wires, but all power to his elbow, he was 25 ft. in the air. Funny to watch as was them trying to walk a wire. This is Sam, Josh and Nick. Sam and Josh were doing all they could to make Nick fall off, which he didn’t. The two of them, couldn’t stay on. From all the pictures one sees, the cable is pretty thick, but.. way above the Falls I wouldn’t want to know. One of the women, Lara Spenser, had a go at walking the wire too but didn’t see much of whether she had any success or not. Of course the Wallenda family have been doing wire walking through generations and its not so many years several of the Flying Wallendas were killed trying to do a stunt on a high wire which they had been doing for 15 years. Clicking the highlight will give you a background on the Family and their tragedies.

Headline yesterday was about a Quebec judge who has now been found guilty of shooting his 71 yr.

old wife. Seems to me pretty incredible that a man who judges other should end up committing such a crime. It did occur to me to wonder if his wife was terminally ill or something, otherwise, to me, it is inexplicable. He won’t be too popular if he goes to prison, not a good place for any officer of the law. Makes me wonder why on earth somebody in his position would do such a thing? Heard an update on the radio, it appears the wife was an invalid and he was having an affair with his secretary, nuff said.

Funny story, the police received a report of a naked and bloody man – when they went to investigate, it turned out the man had been fast asleep, sleeping in the buff, he was startled awake by a spider and dashed out crashing into some glass doors. By the time the cops arrived he had put some shorts on.

I thought this looked delicious in the pictures, reading it though, it is a kind of variation on a quiche. Won’t stop me trying it, just the same.

Tomatoes and corn have a natural affinity for one another: the slight acidity of tomatoes balances the sweetness of the corn. Here they partner in a delicious quiche-like pie. The dough is very forgiving and bakes up into a sturdy shell that’s great for just about any savory pie or tart. Perfect for a summer brunch or try it with a tossed salad for a light supper. 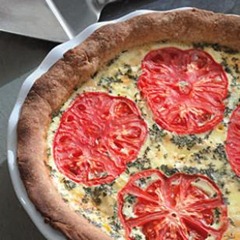