Whale of a Tale, Our Weekend,

Maybe the story of Jonah and the Whale was true. In the news, Sunday morning, a tour operator in South Africa was caught in a whale's mouth 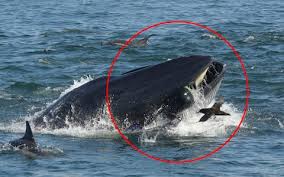 He was out filming a feeding frenzy and watching out for the sharks when he was suddenly in the whale's mouth. No doubt the whale was as surprised as he was. The video is worth a watch. He said his first thought was "he can't swallow me I'm too big".

What a weekend. Friday Matt's back was really hurting him and he was having trouble walking. Saturday morning he was worse and insisted he needed to go to the hospital. Called the ambulance and they carted him off. They couldn't take me because of my walker. They took him to the hospital where I spent 3 weeks last year!!! Finally, after lunch I called a cab to get there $20. I just couldn't walk to where our car is parked underground, fold up my walker and put it in the trunk, drive to the hospital, maybe find a fairly close parking spot and then drag out the walker and have another long walk to get into the Emergency Department. Matt left home around 10, I arrived at the hospital by about 3:30 and he still hadn't seen the doctor. Guess they were super busy. Prior to this, bearing in mind where his pain was, we thought maybe it was the kidney stone. However, when he did see the doctor she figured it was all to do with degenerative arthritic disks. (Otherwise known as old age) and she has said a) he should  use a walker, not a cane, and b) gave him some flexion exercises to do. She has also ordered a physiotherapist for him. I might say, when I arrived in the hospital, Matt had no idea where he was, at one point he seemed to think he was in jail. Very confused. He didn't know he was in Emergency at the hospital. He had taken Tylenol 3 for the pain but the doc said Codeine (which is in the pills) could cause confusion. She recommended he took just Tylenol. Eventually we called a cab and came home. Matt fell by the door leading into our corridor and as the floor is tiled, he couldn't get up plus he had hurt his hand. I couldn't get to our apartment because he was in the way. I was yelling help down the corridor. Finally he managed to slide away and I knocked on a neighbour's door, nobody home of course, so I phoned the super. The Assistant Super came up and helped. Apparently he has a bad back so probably shouldn't have helped at all. Matt was OK once he was upright. I bandaged his hand for him. I had planned to cook some beef, but it was fairly late so I used the remaining Shrimp Creole sauce threw more shrimp into it, cooked the rice and, hey presto, supper.

Sunday morning I had my fizz. I also got a neighbour (who does a bit of cleaning, etc.) to do our laundry as neither of us were up to walking to the laundry room, not far, but.... I also got a Delivery company to collect some groceries I had ordered for today, not cheap but needs must. I must talk to the neighbour about doing that for me or at least, pulling the shopping trolley upstairs for me. Actually she ended up not charging me, really nice of her. Turned out to be a pretty expensive weekend. Monday afternoon (although 12:20 is still morning to me) we have appointments at our family doc - in the next town. Missed the last one due to snow.

Roll on when I have my vascular surgery, hopefully in May or June. Right in the middle of Asparagus season!!!

The beef I was planning to cook was an Instant Pot recipe so I cooked it for Sunday. It was delicious, but I think I maybe gave it a tad too long. Also, the trivet tipped so a corner of the roast was in the liquid. Didn't seem to hurt though. The recipe calls for marinading the beef and then chucking the marinade. I added some of it to the stock underneath the trivet and then when I took the beef out, I added Bisto and it was great. I was delighted with the dish and will certainly make it again. I will post the recipe tomorrow with my alterations. This was definitely one of those dishes you could just walk away from and forget about. It will be a favourite of mine I think.

Don't remember if I shared this recipe with you before. I made  it just before I went into hospital last year and it apparently kept Matt going for a while. I tasted it, but never ate it. I cheated and used canned beans. Now I think I actually did post this last year but as I plan to make it again in the very near future and had trouble finding the recipe, now I've got it, you get it too. 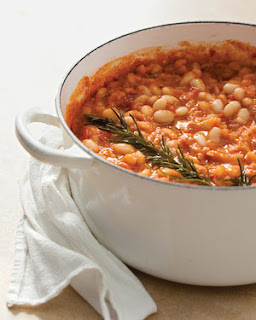 2. Pulse tomatoes, with juice, in a food processor until coarsely chopped. Heat oil in a medium heavy-bottomed pot over medium heat. Add chopped onion, the garlic, and red-pepper flakes. Cook, stirring occasionally, until onion and garlic are tender but not browned, about 3 minutes. Add tomatoes and rosemary. Bring to a boil.

3. Add beans, and simmer, stirring occasionally, until tomato sauce thickens, about 20 minutes. Season with salt and pepper. Serve warm, and drizzle with oil just before serving.