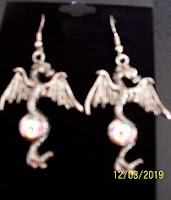 I treated myself to a gift, not sure whether it was for Valentine's or Easter, but along with my new lid and gasket for the Instant Pot, I bought some dragon earrings. Well I am called Grandma Dragon after all. I think they are made of pewter and the jewel is somewhat like crystal with opalesque colours. Not tried them on yet, only just arrived.

At 5:45 this aft, Matt's physiotherapist came. He agreed with me that it was probably bowling last week which had caused Matt's bad back. He basically came today to do an assessment. He thinks Matt will be able to bowl again with the help of a special belt which will prevent, or at least hinder him bending so that he has to remain upright when bowling. Several people do that anyway and are pretty accurate bowlers. Pratt (yes I know!) will start therapy on Friday or Saturday. He wants to use a TENS machine. I have one, but I can't find it. Will have to hunt for it but I have trouble bending low so will have to ask my cleaner to help me. A couple of minutes bending over and I am in agony. Roll on May/June when hopefully I can have some vascular surgery done to help. Keep your finger crossed please. How's this for a coincidence, his family doctor is the same as ours.

I ordered a couple of sweat shirts, most have mine have lost their soft fuzziness inside through washing in hot water. Originally didn't know you shouldn't. They arrived today and one is a very bright electric orange. Matt hates it.  It doesn't do much for my complexion I must say. What with my extremely short hair (did I mention that) and such a brilliant colour, it doesn't look like me at all. Everyone compliments me on my very short hair, I hate it. I will be so glad when it grows. However, it does seem to have helped the condition which had become really dry and horrid plus I was moulting like a dog LOL.

Finished off the mac and cheese to which I added a bit more milk, and it was still just as good.

I was following one recipe and came across this one. The English are big on Indian food because of extensive involvement with India once upon a time. I suspect some of the Indian dishes served are, like Chinese, no longer totally authentic, but this is a very popular one and lucky me, I found an Instant Pot version. Haven't got all the ingredients so can't make it tonight. Although I can use sour cream instead of yoghurt and I might have some marinara sauce (home made) I could use. Oh, I need 2 cups cream all told, haven't got enough I don't think. However, AllRecipes have lots of Instant Pot recipes so I must check them out. You can make many of these recipes without an Instant Pot of course.

See how to make this top-rated recipe for spiced chicken in a tomato cream sauce.

2. Turn on a multi-functional pressure cooker (such as Instant Pot(R)) and select Saute function. Add chicken with marinade; cook until tender, stirring occasionally, about 5 minutes.

3. Place tomato sauce, garlic, garam masala, paprika, turmeric, and salt in the pot; stir until well combined. Close and lock the lid. Select high pressure according to manufacturer's instructions; set timer for 10 minutes. Allow 10 to 15 minutes for pressure to build.