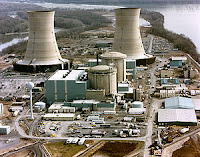 Just watched one of my favourite movies, The China Syndrome with Jane Fonda, Jack Lemmon and Michael Douglas. It is about the possibility of a nuclear core being exposed and the explanation of the title is: "China syndrome" is a fanciful term—not intended to be taken literally—that describes a fictional result of a nuclear meltdown, where reactor components melt through their containment structures and into the underlying earth, "all the way to China." If you have never seen this movie it is well worth watching. It was made in 1979 shortly before the Three Mile Island accident - apparently they stopped promoting the film when that accident happened but the mere fact of Three Mile Island promoted the movie anyway. Although the central plot is about a potential nuclear accident, the film is basically about TV reporting. According to the presenters on TV tonight, it is very realistically done. I have talked about this movie before, I always watch it when I get the chance.

Been a busy day for us today, the main thing is Matt having got his "wheelie" it is much snazzier than mine (pout, pout), and the guy who delivered it asked if I had bought mine in a bargain basement. I could get one the same, the goverment pays a large percentage, but we would have to shell out $81 as our insurance wouldn't pay for me to have a second machine and I would still have my current "wheelie".  In fact, the brakes are metal clamps and stick out at the side of the wheels and catch on walls, doors, furniture, you name it. Bit of a pain in the rear end.

Our cleaner phoned about doing some extra time for us as we can't manage some things right now, our blister packs (medication) arrived, right now, I can't remember everything that happened, but it seemed it never stopped. Tomorrow, as far as I know, the only thing due to happen is the therapist will be here in the afternoon. Matt's back has been pretty bad today for some reason. I thought the TENS was doing a good job.

Ordered some shopping today and forgot to get some ice cream. Maybe I shouldn't eat it anyway!! I recently saw a snipped of history about the ice cream manufacturer, Chapman's who make our favourite ice cream. Apparently the place burned down a few years ago. Glad they decided to rebuild, it really is good.

I have always been keen on Irish Coffee. Here is a dessert based on the drink. Yummy. 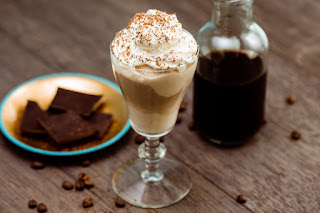 1. In a Georgian Irish Coffee mug, add all ingredients.