What a day. We set off good and early to go to the cardiologist. couldn't find a wheelchair parking area but Matt dropped me at the front door and went and parked the car, as it turned out, not far away. Having checked in I went for my ecg and then my echocardiogram pretty quickly. My appointment with the doctor was for 11:15, however we didn't get in til 12:30 - 1:00 (not quite sure). Matt was having a fit and fuming about it, but the receptionist said he had had two very sick people to deal with. Anyway in we went and had a longish chat. I didn't realise the vascular surgeon had sent him details of my arteries. So, they are kind of co-operating. The upshot is that the cardiologist suggested I have an angiogram to check my heart arteries, etc. so that I will be in better shape for the vascular surgeon. So now I have to wait for dates and paperwork. Won't be that far off I guess as I am supposed to have the vascular surgery some time around May I believe.

So, finally we are heading home (must have cost us a bit in gas I think) and about half way home I hit a pothole which turned out to be a sinkhole, well seemed like that to me, there was a very loud bang and there we are tipped to one side and forward. Blown tire. I phoned for a tow truck and the next thing I knew a guy stopped in a private car and said could he change the tire for us. I thought he was form the towing company. Turned out he was a Good Samaritan, not only that, a second guy stopped to help who was also a Good Samaritan. The tow truck arrived and they said thanks but we've fixed it. The driver seemed happy enough, I would have thought they would be annoyed because they lose business. I was so impressed that these guys would stop and help us. They both carry heavy weight jacks around with them so they are looking for cars in trouble. What wonderful people. I am going to Meineke, our local garage, at 8:30. For me that is before the crack of dawn. We are driving on a donut wheel at the moment so they will fix it all.

Got home and, for me, it was late in the day so I shoved some Nong Shim Noodles in the microwave to feed myself. Did so and then started phoning - had several calls I needed to make, seemed like I was busy for ages. The garage first of course. I had ordered a jar lifter and it arrived whilst we were out. Purolator left a ticket saying it would be at an office which is half way back to the Cardiologist. They have agreed to re-deliver on Thursday, that's a relief.

We wrapped my wrist in a bandage by the way to give it some support. I think it has helped a bit. So, please keep your fingers crossed still.

A friend is spending time in Florida and just wrote me that their asparagus season is under way. I said she could have waited to fell me until ours was ready. She is getting local strawberries too.

I just cooked the Instant Pot Tikka Masala which I posted a couple of weeks ago - it was delicious. Have leftovers of course.

Never been big on tacos, not sure why, the few times we have eaten them we have enjoyed them. I liked the look of this dish though.

Tim Byres’s shrimp tacos are delicious with this tangy salsa, but the surprise here is the crunchy 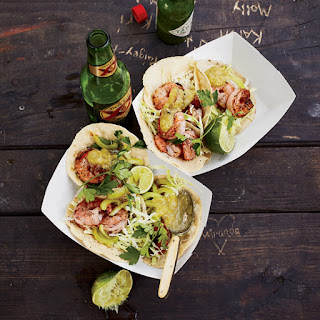 1. In a medium saucepan, combine the tomatillos, onion, jalapeño and garlic with 1 cup of water and bring to a boil. Simmer over moderate heat until the vegetables are softened, about 8 minutes. Using a slotted spoon, transfer the vegetables to a blender.

2. Boil the cooking liquid until reduced to 1/4 cup, then add it to the blender and let cool completely. Puree the salsa and season with salt and pepper. Transfer the salsa to a bowl, stir in the chopped cilantro and refrigerate until chilled, about 45 minutes.

3. Meanwhile, in a bowl, toss the celery with the lime juice; season with salt and pepper.

4. Light a grill or preheat a grill pan; oil the grill grate. Thread 3 shrimp onto each skewer. Brush the shrimp with olive oil and season with salt and pepper. Grill over high heat, turning once, until lightly charred and cooked through, about 4 minutes. Remove the shrimp from the skewers and transfer to a platter. Serve the shrimp with the salsa, celery salad, warm tortillas, cabbage and parsley leaves so guests can assemble their own tacos.