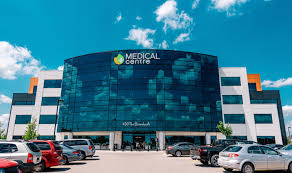 Because I was concerned about where to go for my cardiology appointment, we decided to drive there and "case the joint". Am I ever glad we did. There seems to be miles of road known as The Boardwalk. Not only that lots of traffic islands. Nor could I see any numbers. Eventually spotted a tall glass building with Medical Centre. Pulled into the parking lot and double checked we were in the right spot, drove round a little bit and didn't see a wheelchair parking spot anywhere, called the office and they assure me there are lots, hope there is one free tomorrow.  Looking at the photo, I guess it's not all glass, just the frontage. That parking area in front was chock full today. It took us about 40 minutes to get there. May take a bit less tomorrow although I will not work on that assumption.

I seem to have competition, on The Really Real Housewives of America Liz Seckman is posting recipes for Instant Pot meals today. Sounded good and I am certainly going to make a note of it, despite the competition. Especially as Matt is now eating sweet potatoes after so long of not cooking them at all.

Today we managed to pick up our own groceries although it meant Matt used his cane which he has been told not to. However, he will have to use it when we go to the bowling alley. Talking of which, I have a major crisis I seem to have hurt my right thumb and wrist somehow and if it doesn't get better, I am screwed for bowling. Fingers crossed everybody. No idea what happened but it hurts. Also went to the baker, when I phone them they save 7 Grain buns for me in their freezer and I buy them at half price. Well, they are going straight in my freezer. They had so many saved today, wasn't sure I was going to have room for them, but I managed with less problem than expected.

This sounded interesting although apparently it was originally a chicken recipe. I happen to like prunes although I don't keep them in house. Olives I buy when I need them.

We took the classic, beloved Chicken Marbella recipe from The Silver Palate Cookbook and made it weeknight-friendly by using quick-cooking pork tenderloin instead. The meat is marinated and then 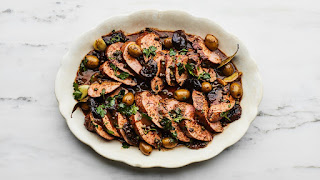 cooked in those same delicious juices, which get turned into a luscious sweet-and-sour pan sauce.

1. Season pork with salt. Let sit 15 minutes while you prepare the marinade.

2. Combine wine, prunes, brown sugar, capers and brine, olives, vinegar, garlic, bay leaves, oregano, and ¼ cup oil in a large resealable plastic bag. Add pork, seal tightly, pressing as much air out of bag as possible, and turn to coat. Chill at least 2 hours or up to overnight.

3. Place a rack in center of oven; preheat to 325°. Remove pork from marinade and pat dry; reserve marinade. Heat remaining 1 Tbsp. oil in a 12" skillet over medium-high. Cook pork, turning occasionally, until golden brown all over, 6–8 minutes.

4. Remove pan from heat and let cool 1 minute. Pour reserved marinade over pork. Transfer pan to oven and bake, basting pork once with its sauce halfway through, until an instant-read thermometer inserted into the thickest part of tenderloin registers 145°, 22–26 minutes, depending on thickness.

6. Slice tenderloin crosswise against the grain. Transfer to a platter and spoon pan sauce over.