So, both of us needing our ears lowered, we headed off to the hairdressing salon Wednesday morning. Matt went first and I was given a cup of coffee. Then a man with mental problems came in so he had

his buzz cut. I got my hair done after that. She ended up cutting my hair very short. Matt says it looks good, I'm not convinced, however, it will be a long time before I need another cut. The hairdresser had asked if we were going out to lunch and I said no, but on the way home I thought "why not?" so headed for the Red Lobster. It was bitterly cold today and I made the mistake of requesting our usual booth which turned out to be in the path of the wind coming in from the opening door. Won't do that again. We both had Island Jumbo Coconut Shrimp which was absolutely delicious. Didn't bother with a side again, can get all our veggies at home. I then ordered two Chocolate Wave cakes to take home, we had the ice cream part in the restaurant. We ate the cake for supper.

I phoned the bowling alley but they had no room for us after lunch so we thought we had better go get our dead headlamp bulb replaced. Had a hilarious story from the guy who does the booking in. Apparently he is deathly afraid of planes but Meineke finally insisted he had to go to some convention or other. He started drinking early in the morning and the rest of the story was very funny. My first husband was like that, terrified of flying so he tried to deal with it by drinking. Eventually, when he had to fly for business (after we were divorced) the doctor gave him some pills which he labelled "happy pills". Not sure what they were but apparently they helped.

We drove into the bowling alley parking lot at one point and there was nowhere to park so decided to go back later. Got home and in the end decided not to go. Only trouble is, we forgot the cakes in the car so Matt had to go get them and park the car underground. Decided to go early Thursday afternoon.

Having had a lot of lunch, I just did tomato soup for supper plus the cake. Now I am out of tomato soup so looked for an instapot one online. Lots of the recipes called for all kinds of veg as well as tomato. No thanks, I want just tomato. Finally found one which was pretty close to what I normally make, so, with a couple of adjustments, this is the recipe I will use. For a start, I will have to downsize it as my Instapot isn't big enough for this amount. I don't usually use pepper flakes but might just do that for a change. 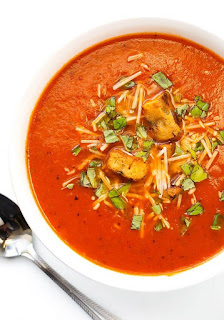 To finish (Optional, To but really makes this soup extra special!)

1. Press the Sauté button on the Instant Pot. When the display reads "Hot" add the oil and butter.

2. Add the onion and cook until translucent, about 7 minutes (let the onion brown a little for better flavor). Stir occasionally.

3. Add the garlic and red pepper flakes (if using) and cook for 30 seconds, stirring constantly.

4. Add the tomatoes, broth, salt, pepper, Italian seasoning, and basil. Stir and close the lid of the pot and lock it into place. Set the steam release knob to the Sealing position.

5. Cancel the Sauté mode. Press the Manual (or Pressure Cook) button and then the + or - button to choose 5 minutes.

6. When the cook cycle ends, let the pot naturally release pressure for 15 minutes. Then turn the steam release knob to Venting and manually release the remaining pressure.

7. When the pin in the lid drops, open the lid and stir the soup.

8. Use an immersion blender to puree the soup to a creamy consistency. Or transfer to a blender and carefully blend the soup in batches. Please use caution!

9. Stir in the Parmesan cheese and let it melt into the soup.

11. Taste and adjust salt, if desired.

12. Garnish as desired and serve.