Well,  being a weekend nothing much happened to us I'm afraid. Sunday night watched Jeremy Paxton's Rivers about British waterways. I had no idea there were so many rivers in Britain, apparently there are over 6,000 which figure astounds me. For a tiny island that is a lot of waterways. His programme only covers 4 rivers - three of which are the Tweed, the Severn and the Thames. Not sure what the fourth will be. It is incredible what one learns about the country of one's birth having left it. This is the one about the Thames.


Tuesday, tomorrow, I finally get to see a cardiologist. I have an ecg first I gather and then get to see the doctor. Will have to get cracking as I am not 100% certain where the office is. I have never been to that area of town. I have, of course, googled, but it's not quite the same as having been there before.

Oh, for those who are interested, my rice, with the addition of a little water, came out fine. Thanks.

It's funny, for years I have been making cucumber salad with a recipe I inherited from my mother. Never really questioned it. Then a similar recipe just turned up on Food and Wine. The way we made it was to cover the cucumber with salt for a while until it wilted then rinse it and add sugar and white wine vinegar, never any onion. In fact, over the years, I have tended to make it much like this recipe but still with white wine vinegar. From the picture, it looks like white was used anyway. Might try adding onion next time. 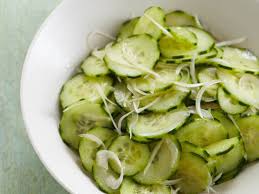 1. In a medium bowl, toss the cucumber slices with the sugar and salt and let stand for 5 minutes. Stir in the vinegar and onion and refrigerate for 10 minutes, then serve.