I got my partial plate at 9:30 a.m. Monday morning. When the dentist first put them into my mouth,

they hurt like hell in one area only. She took them out and did a bit of grinding and put them in again, then out again. Turned out that my lower gum is still pretty sore from the extraction. I was unaware of it before this. In the end she got it so I could wear it. It doesn't feel too bad and it is no longer hurting, but eating with it is going to take a heck of a lot of getting used to. The blurb they gave me says to wash/rinse the plate after each meal. That is going to be a bit of a bother I think. However, I will try not to be like some people and will wear the partial all the time. 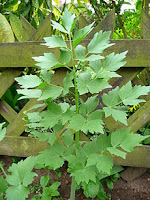 Whilst waiting to go into the surgery, I was talking to the Receptionist, Alex, (she is really more a one woman office staff) and she had a large bunch of lovage which she had brought in for someone. I am familiar with the plant although I have never seen or used it. I think it is an old English, or possibly European herb and not much used today. Maybe in the Mediterranean and points east. Anyway, we were given a bunch of it to try. Alex, said she uses it in soups including lamb or chicken. Never made soup with lamb so that's a new one on me. The leaves look like large parsley but have a different taste. I found a recipe which appealed to me made with new peas and lovage so I think I will be trying that.

I managed to eat a normal lunch but found the asparagus got caught in my teeth easily. Think I will have to cut them into pieces in future, until I am used to this anyway. For supper, I chickened out and we had home made carrot soup. We went bowling in the afternoon and my teeth were much admired LOL - my scores were much admired too. One game was fairly low, but the two others I got pretty good scores. I was chuffed. I just hope I can continue this trend into league play which starts on Wednesday. Bearing in mind we play twice a week and sometimes three times, you would think our bowling would improve. Doesn't seem to work that way though.

This is another of my particular favourites which I picked up some years ago and I keep some frozen on hand all the time. It always amuses me because all these recipes talk about trimming the asparagus or breaking off the ends, etc. etc. which, with farm fresh, I never have to do. By the way, the weather is starting to warm up this week so hopefully we will be able to get as much asparagus as we want. 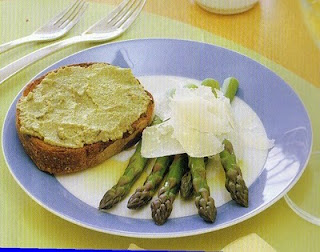 3. It shows the recipe served on crunchy toasted French or Italian bread with a curl or two of Parmesan on top and some asparagus at the side.

Source: Food & Drink from the LCBO