Some of you remember that about a year ago I bought an electronic steamer especially for the bed bugs but they didn't seem to appreciate it. Therefore it has sat in a cupboard until I finally got round to trying the window cleaning attachment yesterday. Woo, it works really well. I am ashamed at the dirt which poured off them. We have enormous windows in our dining/living area and they are a *itch to clean. Not any more. Matt had to do the very top I couldn't quite reach and he threatened me if I stood on anything. Silly, I have excellent balance thanks to both T'ai Chi and exercise classes. Haven't done them all but it won't take long now. Now I have to investigate some of the other attachments.

Today is a holiday in Canada, Victoria Day which is usually known as May 24th weekend. In fact 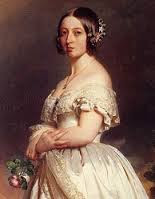 someone the other day, a born and bred Canadian, didn't even know it was Victoria Day. I heard a snippet on the radio as to why we celebrate Queen Victoria's birthday. Apparently she was very much involved in the development of Canada and was one of the main proponents of Confederation. So whilst she was alive they celebrated her birthday and once she died, a particular date - May 24th - was designated as a remembrance of her life in perpetuity. I chose a picture of young Victoria rather than the rather horrid pictures of her as a miserable old woman which are the ones usually shown. Mind you I notice that quite a few shots of Queen Elizabeth show her as looking grumpy although I understand she isn't. Maybe it's just as old women they had/have lots of aches and pains - something I know about. As I sit typing this I am listening to fireworks which are being let off in honour of the day. Tomorrow, Monday night, will probably be much louder. 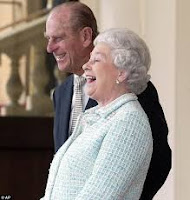 Talking of Queens, I watched The Queen at 90 last night which had been recommended to me. Enjoyed it but I could hardly understand Prince William a lot of the time, his diction is terrible for a future king. Harry has a pretty bad speaking voice too. I know the royals are trying to be more like commoners, but that is going too far. The other couple talking about the Queen were Prince Edward, Earl of Wessex, the Queen's youngest son, and his wife the Countess of Wessex. There were lots of shots of the Queen laughing in that programme. I like this one of the Queen and the Duke.

I haven't actually tried this recipe, not sure why, I have had it for a while and with the fresh asparagus I get, it should be really good. I think I am going to make it for lunch today. 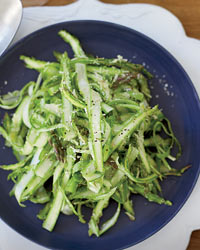 1. Using a vegetable peeler, shave the asparagus into long, thin strips and transfer to a large bowl.

2. In a small bowl, mix the Parmigiano-Reggiano with the lemon juice, water and olive oil. Add to the asparagus and toss to coat. Season the salad with salt and pepper and serve at once.