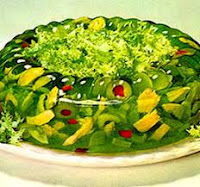 Talking about spinach salad yesterday it occurred to me that I had never had spinach in a salad before I emigrated to Canada. Only ever had it cooked. Then I thought of beet greens, didn't even know they were edible before I came here. I have recently found out that you can eat radish greens too, I tried a little and wasn't a convert much as I like radishes. Another thing I had never had was a sweet jellied salad with my main meal, aspic salads, yes, but not some of the things which were dished up to us when we first came to Canada. I have never enjoyed sweet jellied salads with savoury foods. I have never made anything in aspic myself but my mother, who was a brilliant cook, often used to make things in aspic which were delicious. We used to joke that my mother could cook anything but she couldn't pronounce the name of it. I wonder if some of these foods are eaten in the UK these days? Hilary, if you are reading this, that's a question for you to answer please, or anyone else from the UK. Another thing I had never eaten was squash, we have/had marrow in the UK which I have since discovered classifies as a squash but things like butternut squash and so on I had never heard of.

Bowling was absolutely dreadful Thursday. Matt had one good game, I didn't. Blaming my aching legs which really didn't have anything to do with it. Afterwards we went and bought some very expensive fillet steaks from the Victoria St. Market which I hope will be tender enough for Matt. I get so tired of serving him meat which he finds too tough. Hopefully these will be OK for him. Mind you, if they are, we probably can't afford them very often from there.They are wet aged so I will be interested to see what the result of that will be.

We finished the spinach salad on Thursday night but this time I added some avocado which made it even better.

This recipe was in Kevin Lynch's Closet Kitchen blog and, because of the asparagus, not to mention the spinach, I decided to use it today. One thing we do not have is a barbecue, the reason being because we live in an apartment building. Not sure if we could use our indoor outdoor grill. 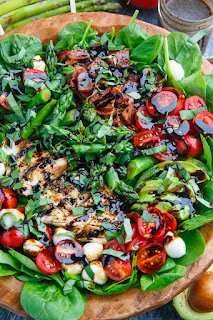 Servings: 4
A hearty summer grilled chicken and asparagus spinach 'caprese' salad with tomatoes, mozzarella, basil and a balsamic vinaigrette along with some bacon and avocado!

Option: For One-Pan: Make this a one-pan meal by cooking/pan-searing/pan-grilling the bacon in a pan, followed by the chicken, followed by the asparagus.
Option: Cook the bacon before hand to speed things up and to allow you to do all of the cooking at the grill.