Dem bells, dem bells, dem bloody bells. A friend who is also a member of our team, joined us for bowling on Thursday afternoon because she wanted to do a bowl ahead for next week. Turns out that in her apartment building they are also testing the fire alarms and in her case, it takes two days (much bigger building). Enough to drive one totally crazy I would think. I played pretty well again today, I would love to think I could do the same again on Wednesday, the start of our summer league. Keep your fingers crossed for me. Having talked about Phyllo handling yesterday, I am determined to have a go when I get some more asparagus, hopefully today. The weather has been nice, but not too warm but from the picture posted by the farmer yesterday, the asparagus have been growing after the frost the other night. This was a picture posted by the farmer, Tim Barrie, on Wednesday, you can see all the dead (white) asparagus  but also the shoots of the new stuff beginning to grow again. Weather does play such an important part. I remember a few years ago when it was warm enough but not enough rain.

This news about BMW cars bursting into flame is going to hurt the sales quite a bit. BMW seem to think there isn't a problem, but from all that is said on the news I would think it is a pretty serious problem. People have even had their houses burn down because the car was in the garage when it caught fire.

I have just finished the book The Girl on the Train by Paula Hawkins. I must admit, I was put off by the most unsympathetic protagonist and by what I had been told. However, someone else told me they had really enjoyed the book, so I persevered. I am so glad I did, I thought it was an excellent story. I would highly recommend it but I think one needs to read further than 50 pages to start appreciating what the story has to offer. I am now looking forward to her second novel, Into the Water.

I haven't tried this recipe yet, but really must do so, sounds good. 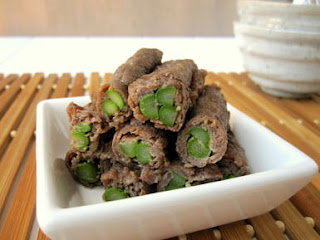 1. Combine marinade ingredients (soy sauce, sake, mirin, and sugar) in a medium bowl and stir until mixed. Add thinly sliced beef and marinate in the refrigerator for 15 minutes.

2. Meanwhile, trim bottom of asparagus, then slice asparagus spears vertically in half or quarters, depending on the thickness of the spear. Blanch asparagus in boiling water for 2 minutes. Remove from pot and rinse with cold water. Set aside.

3. Take 2 to 3 pieces of beef and gently spread it out on a plate or cutting board. Lay 2 or 3 asparagus pieces across one edge of the sliced beef. Gently roll-up the asparagus in the beef, tucking the end under the bottom of the roll. Repeat until all the beef and asparagus have been used to make several rolls.

5. Slice each beef and asparagus roll into thirds or fourths, plate, then serve with Japanese hot mustard (karashi). The rolls can also be served as is, without any hot mustard.