Hey, I get my new teeth today, hurrah. I will be going to the dentist at 9:30 and will be flashing my gnashers at everyone later on LOL. I have heard so many stories from people who's dentures or partials hurt so they don't wear them. I mentioned that to the receptionist when she phoned to remind me about my appointment, she told me not to listen to such stories - easier said than done. I firmly believe that waiting to allow one's gums to heal properly and the jaw to adjust before one gets the plate is a good thing. One doesn't look very pretty, but it's worth it I think.

Rare Breeds I was thinking about her comment that people preferred their meat and therefore their animals to have less fat which made me realise that this is a lot to do with the lack of tenderness in meats today. Once upon a  time we could deal with 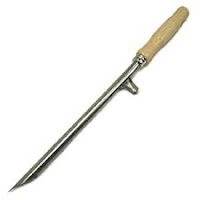 this by 'larding' but this is something very few people know anything about today. The following is a Google quote Larding is the cooking technique of inserting strips or pieces of fat into a piece of meat that doesn't have much fat of its own. Fat is important in cooking, as it melts and keeps the meat from drying out. It's a myth that braising or even boiling meat will keep meat moist which then made me think, maybe I should start larding meat for Matt who finds meats very tough these days. I then figured I would, of course, need a larding needle. No, I have never done this before, but it does seem to me that it is becoming more and more necessary. Especially when even fillet steak can seem tough. Admittedly I did see some well marbled steaks at the store the other day which is unusual these days. In case you are unfamiliar with the term, marbled meats have streaks of fat running through them which helps the meat to remain tender as well as moist. We have become so worried about overweight that we have been spoiling some of our foods - not only does fat improve the texture, it also improves the taste. It may also be that store bought meat is not as well hung as from a farm or a specialty store. I still haven't bought meat at the local specialty store who advertising dry aging for their meat (other than fillet which they wet age). No not sure what that is, but dry aging you lose too much meat for it to be a good system to use on a fillet. OK I just read up on it and have added a link.

Have you heard of Cloud Eggs. I hadn't and came across them the other day and thought great, easy, I will try it. Basically you whip up egg whites as if you were making meringue. No problem, then you add some salt and some Parmesan, my beautifully fluffy egg whites became flat egg whites - in the end they became scrambled eggs. I did what the recipes said so I don't know why they died on me. I will have to do some research - I was terribly disappointed especially as the recipe looks so easy.

I hope you all had a great Mother's Day, well particularly the mothers of course. I normally don't get anything because I am only a step mother, but I am also a Grandmother to Dragons and I was thrilled to receive the following along with a delightful message. 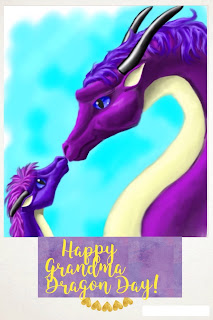 Did any of you see Charles III on PBS Masterpiece Theatre Sunday night? Pretty powerful stuff and very well done. I do hope the family isn't like that though. Shades of Shakespeare in the dialogue. 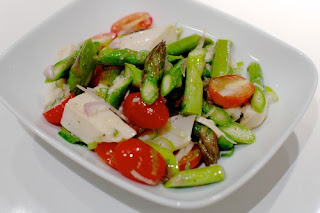 Asparagus Salad with Hearts of Palm and Cherry Tomatoes

1. Cook asparagus til al dente. Chill in ice bath or cold water. Chop into bite sized pieces cut diagonally. Place in large bowl. Cut each stalk of hearts of palm into 4 pieces and then each into 1 inch pieces at a diagonal.  Add to bowl.  Add your halved cherry tomatoes.  Add in sliced green onions.  Add in chopped shallots.