Rhubarb is also in season at the moment and, unlike asparagus, thrives in this chilly weather we have been having. The farm was limiting customers to $5 bags of asparagus, but I ended up buying 5 lbs of rhubarb with no problems. Only 1 lb of that was for me. I think pies will be made with the other 4 lbs. I, on the other hand will be just gently stewing mine with a little sweetener and a bit of grated ginger. However, when I saw this pie, I thought it looked very enticing. I have never been big on pastry, neither eating nor making it, but this one does look good.

The chef and cookbook writer Edna Lewis believed that the key to spring cooking was a light hand, and here she goes easy on rhubarb, sweetening it just a little with sugar and nutmeg. This recipe, which was featured in The Times in 1991, tempers the rhubarb’s natural tartness a bit but still allows 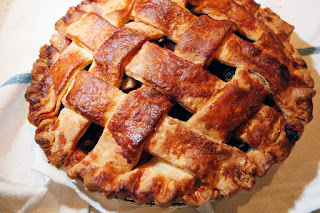 it through, showcasing the fruit’s natural texture.

1. To make the crust, put 1 1/2 cups of the flour in a bowl with the salt and lard and combine quickly with fingertips. Add the water and stir to combine; the dough will be sticky. Add the remaining flour, form into a ball and put in refrigerator for 15 minutes.

2. Divide the dough in two. Lightly flour a board; roll half the dough to cover the bottom of a 9-inch pie pan and put it in the pan. Flour the board again, and roll out the remaining dough. Using a pastry wheel or a sharp knife, cut the dough into 3/4-inch strips and put on wax paper.

3. Preheat the oven to 450 degrees. To make the filling, combine the sugar, nutmeg and cornstarch in a bowl. Sprinkle 3 tablespoons of this mixture on the pastry in the pie pan. Combine the remaining sugar mixture with the rhubarb and fill the pie. Moisten the rim of the pastry with water and make a latticework top over the pie with the dough strips. Crimp the edges well. Bake pie for 40 minutes .