Apart from a couple of comments, not much notice was taken of land subsidence yesterday so I looked it up and here is an article about it. It is not restricted to the Middle East by any manner of means, humans are drawing underground water up as fast as they can and causing subsidence all over. Some of the worst areas are in the south western United States.

These are the kind of cracks being caused in the land by Ground Water Pumping. It's obvious to me that if you remove something, the earth above is going to collapse to fill the space. If I were a young American I would be hounding the government about this desecration of my land. Not that you will have a land if this goes on much longer. I don't know if this is happening anywhere in Canada, but we could end up all on our own if the States keep doing this. If the land sinks low enough the sea will take over. Just Googled and we are doing it too in Canada, think it is a worldwide problem. This is all about growing food and here again there is an answer to growing many things. The people of the Netherlands have found answers to growing many crops hardly using any water at all. This wouldn't work for everything, but many things could grow using this minimal water system usage of theirs.

May 1, can't believe it. Asparagus should be ready any day now. Fingers crossed.

Yesterday morning I had to go to the grocery store because they had only sent me a few bananas - I called and asked if they were short and was told they were not - so I arranged to go collect more yesterday. I have never seen so many cars in the PC Express parking lot. Anyway, whilst out, I am short on fizz so thought I would go get some. Joke, a) it was raining and b) the line-up went right round the building. Like queuing in wartime. Actually, I am not too sure the store was open yet. Maybe they are opening late 'cos of the virus. So, I'm still short of the bubbly stuff. (Just checked, opening is at 11).

I discovered Thursday morning that Red Lobster is open for delivery after all. I was going to place an order but think I will do it Friday evening. 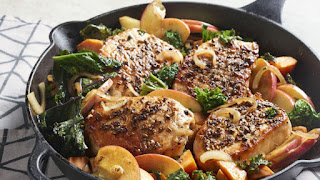 1. Place fennel seeds and peppercorns in a small zip-top plastic bag. Seal bag and pound spices using a mallet or rolling pin until coarsely ground, or pulse them briefly in a spice or coffee grinder. Sprinkle mixture and 1/4 teaspoon salt on both sides of chops.

2. Heat 2 tablespoons oil in a large, high-sided skillet over medium heat. Add sweet potatoes; cook, stirring occasionally, until fork-tender, 10 to 12 minutes. Sprinkle with 1/4 teaspoon salt, then transfer to a plate.

3. Heat 1 tablespoon oil in the same skillet over medium-high heat. Add chops and reduce heat to medium; cook, turning once, about 4 minutes, or until an instant-read thermometer inserted into thickest parts registers 145 degrees F (63 degrees C). Transfer chops to a plate and tent with foil.

4. Add remaining 1 tablespoon oil and the onion to the skillet; cook until onion softens, about 2 minutes. Add apple; cook 1 minute more. Add broth, stirring to scrape up browned bits, then stir in mustard and sweet potatoes. Increase heat to medium-high; simmer until apple is slightly softened and liquid has slightly reduced, 1 to 2 minutes.

5. Add kale and remaining 1/4 teaspoon salt; cook, stirring occasionally, until kale is tender, about 1 minute. Add any accumulated juices from the plate with pork. Serve chops with vegetable mixture.

Author Notes
Jonagold or Honeycrisp would both work well in this recipe.