I give up. Trying to go to the liquor store, first I went and it wasn't yet open and the line up went round the block a dozen times. Yesterday I tried and they had just closed. Today, well that's another story. The car wouldn't start. After about 10 hours (well it seemed like it) they sent a guy in a humungous truck (I had specified my car was in an underground garage) he said fine, he had a portable booster. We went downstairs and he tried the key and noticed that the car was flashing Security. He tried a trick or two to get it to stop but it wouldn't so eventually we arranged for a small tow truck for tomorrow morning. Hopefully. We have had a few incidents in the garage, nothing wrong with the car yesterday, today the security is alerted. I think someone tried to get in the car. What a bloody nuisance. Only place who can "turn" if off is in a garage.

Whilst waiting the 10 hours, Matt was carrying on and on and on. Although he came down to the car with me, he couldn't seem to remember where it was and why there was nobody working on it. He said I would never get it back!! Been a confusing day for him, been a b""ch of a day for me. As I told the guy at Meineke I was going to have a stiff drink, and I did. I reckon I deserved it.

They are showing Jeopardy GOAT again. Last night they showed Ken Jennings in his very first Jeopardy when he became a Champion. I actually think it's too soon to show the Greatest of All Time again although I guess there are people who missed it and would like to see it. I was disappointed the first time. I would like to see a few more early programmes of both Ken Jennings and Brad Rutter. James Holzhauer is too recent to particularly want to see again. We were not watching in the days of Ken's triumphs - not sure why. Used to watch it when we lived in Canada, went down to the States for a few years and watched other stuff (British comedy) for some reason. The minute we came back here we watched again.

I know at least a couple of people who read this blog who do NOT like asparagus, ladydog being one, sorry, but 'tis the season. 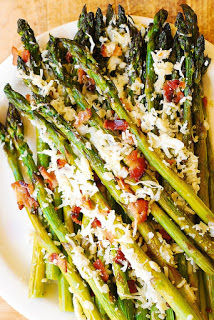 2. Place asparagus in a 2.5 quart casserole dish, drizzle with 2 tablespoons of olive oil, season with salt and pepper, mix everything well. Mix in the minced garlic.

4. Remove from the oven.