How odd, Google commemorates all kinds of obscure anniversaries in their Google Doodles. But Saturday, which was June 6 and D Day or the Normandy Landings they ignored completely. I wonder why. I personally don't remember much of D Day but Matt remembers the build up of tanks and planes which were shrouded in camouflage so the Germans would not know what was happening. He live in Kent, which is in the south east of England where most of the build up occurred.
It all happened 71 years ago which in one sense seems like forever ago, in another like yesterday. Time seems to condense as one gets older, I guess one's memory becomes selective and things which mean something to you seem closer than things which are unimportant or you just forget that they happened. For those of you who weren't even born then, the film, The Longest Day, represents the occasion very well. Absolutely everyone was in it I think. The cast list sounds like a who's who of the movie world.

I was thrilled that American Pharoah won the Triple Crown on Saturday. I think it's very exciting that
it's the first time that has happened in 37 years. What a magnificent horse. Pretty good on the rider's part too. It's not all one or the other but an excellent partnership. I once used to bet on the geegees but haven't done for many years now. We have a couple of famous races in Britain, the Grand National and the Derby (we pronounce it Darby) and one year, Matt, who doesn't gamble on horses, wrote down the winners of the Grand National - no he didn't bet, just wrote them down - and showed them to me after the race. I could have killed him, he would have cleaned up, he had all three of them. They were talking, Saturday morning, about the value of the horse at the moment, now the value must have soared to the heavens. Funny really the horse's name is misspelled which nobody noticed until it was too late to change it, and his tail has been bitten off. I wish I had had a bet on him.

Sole is not easily found, if you wish you could use flounder for this recipe. 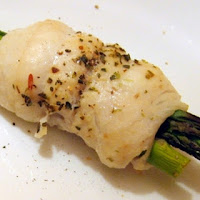 2. Season the skin side of the sole fillets with salt and lemon or lime peel.

3. Place asparagus spears at one end of each fillet.

4. Roll up fillets with asparagus spears inside and secure with plain round toothpicks.

6. In a small bowl combine remaining ingredients and pour over fish.

7. Bake in a 400 degree oven for approximately 15 to 20 minutes or until fish flakes easily.