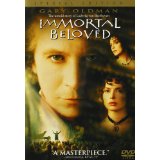 Thanks to Birgit  at BB Creations I have just discovered a wonderful movie. Immortal Beloved. It is about Ludwig van Beethoven. He left a letter addressed to his Immortal Beloved which was found when he died. The rest of the story is about how his friend, Schindler. tried to find out to whom the letter was really addressed in order to carry out a longstanding debt and to pass on the estate which Beethoven had left. All the way through the movie the music is Beethoven's and it is absolutely gorgeous. The film made me appreciate his music so much more for some reason - in particular his Ode to Joy which is part of the 9th Symphony. How anyone, who was stone deaf, can have written such fantastic and beautiful music is beyond me. We have the complete works of Beethoven, I don't know why we don't play his music more often. I rented the movie from iTunes but am seriously contemplating buying it so Matt can see it too. It was such a beautiful movie.

Today I had some wonderful news. Michael Bond, author of the Paddington Bear series, has been

awarded the CBE (Commander of the Order of the British Empire) in the Queen's birthday honours list for services to children's literature. The family are obviously thrilled to bits and Michael Bond is quoted as saying he is so pleased for Paddington. I'ts an amazing story really, he was a TV cameraman for the BBC and one Christmas saw a bear in a store window which he thought looked rather lonely I gather. He bought it and this bear became Paddington. He and his first wife have custody rights over the bear. Have you seen the Paddington Bear film. It's funny and good. I really enjoyed it and ended up buying the DVD. I am thrilled to know the family of a CBE honoree even if I never actually met Michael Bond himself. Funny about British children's authors, we have three bears, Winnie the Pooh, Paddington and Rupert Bear. The latter was a cartoon strip in the Daily Express I believe and they issued a book every Christmas which I received in my stocking. I looked forward to it I remember. 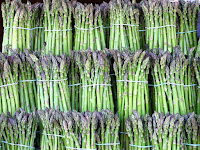 Just learnt something about my favourite food, asparagus, it is part of the lily family. I have been munching this stuff for ever and didn't know that before. Barrie's Asparagus sell a soap which they call Lily Pure Naturals. It carries an exfoliant which is made out of asparagus. Scientists are now saying the bits of plastic (plastic microbeads) in most exfoliants are polluting the lakes. You know those big ones right by me. Think I've mentioned it before but do you know their names spell HOMES? Huron, Ontario, Michigan, Erie, Superior. Matt's dad taught me that years ago.

One of the people for whom I buy asparagus told me she was going to freeze some, or had already done so.  I tried that last year and it wasn't terribly successful. Maybe I will try again. It occurred to me that anyone who has canning equipment could pickle their own asparagus. I don't I'm afraid. Only time I did any canning, I borrowed equipment and that was in NC. I am sure there are lots of recipes but this one I got from Tim Barrie's mom. They actually sell spicy pickled asparagus at the store. It's good. Not cheap but good. 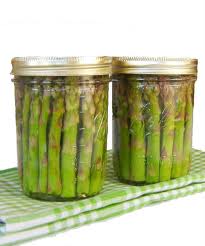 1. Using 5 lbs of Ontario asparagus, wash well and soak in ice water while you are preparing the 6 pint jars. Place 1/2 clove of garlic, 1 tsp dill seed, 1 tsp mustard seed, and 6 peppercorns in the bottom of each jar. Place asparagus, tips up in jar. Bring 8 cups water, 2-1/2 cups white vinegar, 3 tbsp pickling salt, 1/2 cup white sugar to a boil and pour over asparagus. Process in hot bath for 5 to 6 minutes.