I learned this from How to Geek this morning. The country with the most tigers is - the United States. I quote: This staggers me. 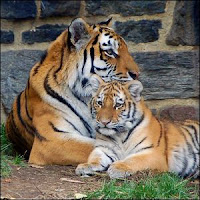 The country with the largest tiger population isn’t India, China, Russia, or any of the Eurasian countries that currently occupy the ancient ranges of the massive cats. The country with the largest tiger population is the United States.
It’s not because there is a secret enclave of feral tigers deep in the steamy Everglades or snow tigers lounging atop the Rocky Mountains, but a result of zoos, conservatories, and private ownership of tigers. The private ownership is so extensive that the estimated population of tigers within the United States (5,000 animals) is significantly higher than the total global population of wild tigers (3,200).

They asked their readers to pick out the country with the most tigers and both China and Russia were on the list. It would never have occurred to me to pick the USA. Zoos and conservatories are one thing, but private owners in the States worry me, there have been quite a few reported accidents. The latest being the zoo where the town has been flooded out and there are now wild cats roaming around free. OK, not a private ownership, but that was a tad unusual.

cookbooks. I made several things from them but one we both really liked was a Cream of Celery soup. Trouble was, these days I don't have dried milk in the house. However, I chopped up a whole bunch of celery, having washed it first of course, cooked it in stock with 3/4 pint water (that's an English pint which is 20 oz.) and once it was very tender whizzed it up in the blender and then added a little skim milk. Tastes fine and we had it for supper on Monday followed by some Brie. The hardest part was getting it tender. I thought it wouldn't take long, I was wrong, I simmered it for at least half an hour, maybe more. One thing I did forget was to peel the celery. The soup was delicious but a tad stringy. There are other simple soups so I will have to have a go at some of them. Dried milk occurred in a lot of WW recipes in those days. There is also a delicious recipe for Skate, but I have never seen that fish here.

Tuesday I will be going for my asparagus run with orders from a lot of friends. Then only two more trips and that will be the end of it for this year. Boo hoo. I've learned a couple of things about it such as storing it, standing, in water like flowers because it is related to the lily. I am assured that asparagus love water. Not sure I have mine long enough for them to need it.

I have no idea where this recipe came from and I don't have a picture for it. Perhaps I had better make it so that I will have one in the future, although, knowing me I would forget to take the picture. I wouldn't use white asparagus because it wouldn't be fresh enough. There isn't anywhere close to me that grows it so buying it in the store I would end up with woody stems. I have only tried white asparagus once and was very disappointed. I am told it needs a sauce, yes it does, regular green asparagus can be eaten plain and enjoyed. I choose green. The picture below is exactly what it looks like when I buy it from the farm.

Tomato concassé is very easy to make, peel tomatoes by dipping them in boiling water for a few seconds, the skins will slip off. Then de-seed them and rough chop the rest of the tomato flesh. Chop some shallots and gently sauté the tomatoes and shallots together in some butter. Set aside until ready to use. 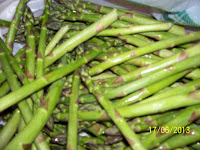 2. Sprinkle spears with lemon juice and olive oil, season. In a piping tube stand up spears all round, fill with salad, tie up with blanched chive then gently remove piping. Sprinkle with sieved egg yolk. Decorate with chervil leaves.