Popcorn, Rhino News, Bowling, This and That.

My apologies to those of you who ended up with Popcorn as an 'ear worm' yesterday. I was reminded the song was performed by Hot Butter. I had forgotten that. 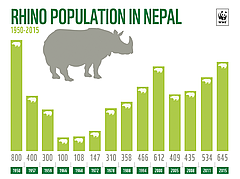 Great news from the World Wildlife Fund that rhinos in Nepal are on the increase and they have had zero poaching in the last year. Although this doesn't happen every year, it is becoming a more frequent occurrence. There is an interesting article if you click on this link. I blush to admit I didn't even know there were rhinos in Nepal, but I am delighted they are doing well. This chart gives you some idea of how serious

their population numbers got at one point. Mostly because of poaching. Governments in Asian countries are trying to convince their peoples that rhino horn has no medical benefits whatsoever (after all it's just compressed hair) but I am not sure they have got very far. One park in South Africa has a rhino who's horn was stolen and she has been bandaged. At the moment she seems to be doing OK. The report said she was camera shy, bearing in mind what happened I would have thought she was people shy. I hate to tell you what Matt says he would do to the people who do this kind of thing. 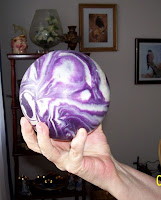 Well, of course, Wednesday is Summer League bowling and for once I bowled really well - I seem to save it for non league play, but not this week. Wish I could say the same for Matt, but he had a very bad day. I think my average went up about 5 points so I am pretty chuffed about that. Thursday we have been asked to go in later as they have half a million kids bowling over the lunch hour apparently - OK I'm exaggerating, quarter of a million!  We also took a vote and the League have mostly opted to play on July 1 which is Canada Day. Matt and I are delighted as we don't do anything special ourselves. No family after all. Plus we would miss our bowling and our exercise by doing the bowling. I'm pretty sure there will be no in house exercise class that day either. I introduced another bowling friend to farm fresh asparagus today, I will be interested to know what she thinks of it. One friend said she was freezing some. I tried that last year but was not very successful. The problem is that we cannot flash freeze in home kitchens so it doesn't work as well. I might have over cooked them whilst blanching too. When I ate them later, they came out awfully limp.

This is an interesting sounding recipe from Hellman's. Obviously you can use any mayonnaise you wish, but I have always found Hellman's the closest thing to homemade. I used to always make my own mayonnaise at one time, then I discovered Hellman's and haven't made any since. And no, I am not paid to advertise for them. I wish.  I love using Leeks too. I make a lot of Leek and Potato soup or I braise them as a vegetable for supper. 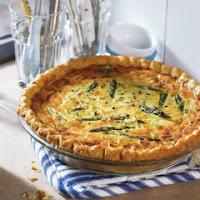 Email ThisBlogThis!Share to TwitterShare to FacebookShare to Pinterest
Labels: Bowling, Leek and Asparagus Tart, Nepalese Rhinos, This and That