The following cartoon really tickled my sense of humour. It was in Monday's edition of How to Geek. It took me a second to really see the funny side. 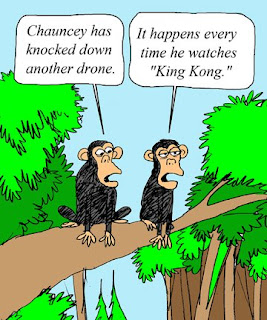 I have just finished reading Uprooted by Naomi Novik. I enjoyed all her Temeraire books about the fighting dragons taking part in the Napoleonic wars, the first book being Her Majesty's Dragon. Great story telling. However Uprooted is a different departure and more in the tradition of the story tales of old Europe. It sure didn't end the way I expected. In fact I found very little about the story to be predictable. One knew right from the start that she, Agneieszka, the heroine, would be chosen by the wizard known as the Dragon that was obvious from the blurb. But after that, nothing went as I expected. I enjoyed the book so much that I bought the Kindle version. The one I was reading was from the library. I really can't praise it highly enough, I was having trouble putting it down and going to bed. Made a nice change from some of the books I have read lately. Only trouble is, once you get to the end, you wish you hadn't. 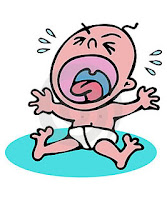 I went, Monday afternoon, and got my very last batch of asparagus. I bought myself an extra large batch. I may well freeze some more of it although it isn't as good, it's better than nothing. For some reason I have never been able to buy frozen asparagus round here. Used to get it in the States. I was going to buy some liquid honey too to save myself a journey later on, but they were out. If you get fresh honey there is a terrific difference to that which you buy in the grocery store.

I forgot to mention, my doctor said I can't drive at the moment because of my carotid. Matt drives most of the time anyway. I should also emphasize that I am not unwell, apart from that apparent fainting fit and the odd dizziness which doesn't happen very often and could be caused by anything.

This is the recipe I was going to post the other day and then couldn't find the picture for. I have now discovered how to export pictures from my cookbook file!! You may now find me in a corner crying my eyes out because the asparagus season is ended. Yes, I have bought store asparagus before now but only in extreme emergencies. But since I discovered Barrie's Asparagus Farm I have rarely used anything else, there is such a stupendous difference between farm fresh and store bought. For those of you who also like asparagus, I hope you have enjoyed this recipe journey. It, and my recipes, will be back next year. From now on we will be into more mundane foods. 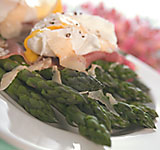 1. Preheat oven to 450º F (230º C). Steam or simmer asparagus just until tender-crisp, 3 to 5 minutes; drain well. Fill large skillet with water. Add vinegar and bring to simmer over medium heat. Slip eggs, one at a time, into simmering water; cook until whites are firm and yolks are just set. Remove eggs with slotted spoon and carefully blot dry with paper towel. (Eggs may be poached several hours in advance; transfer to bowl and cover with cold water. Drain well before proceeding.) Divide butter among 4 gratin dishes. Divide asparagus among dishes; drizzle with lemon juice. Drape proscuitto over top. Arrange 2 eggs on top of each prosciutto. Season with pepper to taste. Sprinkle cheese over top. Bake for 3 to 4 minutes or just until cheese melts. Serve immediately.