I don't know what made me think of it the other day, but I suddenly remembered FHB. Do you know what that is? When I was a youngster, and my parents invited people for a meal, I was always told we should practice it. Family Hold Back. I suppose there wasn't a lot of food and we were supposed to let the guests have plenty before we did. Never seemed reasonable to me. I always thought the family shouldn't have to do that. Funny how odd memories, like that, come to you. 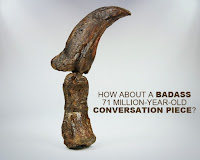 Incredible,  yesterday, being Father's Day, my inbox was littered with ads for stuff for father. One ad even included a genuine velociraptor claw. It was only $12.5 K. I'm assuming that is for thousand. I immediately thought of Alex J. Cavenaugh, I though you would be bound to want one. In all honesty I cannot think of any father of my acquaintance who would want to receive a velociraptor today. I don't know of anyone in that business of course. But really, what a peculiar thing to offer amongst all the sweaters, watches and gadgets!! They say it's genuine. I can only suppose it's a joke and they are not really selling them. Surely they belong in a museum? They certainly would be a conversation piece.

Matt spoke to his daughters on the phone for father's day. It is a pity they are so far away and we are no longer able to visit England. There were obviously kids visiting their grandparents here at one point and it was rather pretty, they were blowing bubbles which were floating up past our balcony. A long time since I did that or were with kids who blew bubbles.

This was not the recipe I was going to use, I have one which is in my cookbook programme. Unfortunately, one cannot export the pictures from it (or I don't know how to) and I cannot, for the life of me, find the origin of the picture in my programme. However, this sounded pretty good.

* Rinse the asparagus then cut in half. Remove the hard parts.

* Wrap the beef around each three baby asparagus. Secure with a toothpick.

* Put a little sesame oil in pan, then cook both sides of the asparagus wraps for 3-5 minutes. The asparagus should not be too soggy.

* Put in a plate, remove the toothpick. Drizzle with a little bit of sesame oil, and sprinkle some toasted sesame seeds and Japanese chili powder.