Weather permitting we should be having lunch at the Mandarin today with a friend.

Couple of things I saw on TV which I found incredible - there was a report in the Daily Mail, I believe, about dinner parties. When I hold one or other people invite us, we usually take a bottle of wine or receive one. According to the article people are being requested to take all kinds of things to a dinner. Someone offered to bring 40 bruschetta and the host said, not enough, bring 100. Another host requested the guests to bring plates. Yet another asked the guests to do the washing up after and whilst they were doing it, the host was drinking up the champagne the guests had brought as well!! Unbelievable.

The second thing, in a National Geographic programme they were saying that in India dead cows 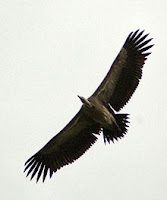 were dragged out into the desert where the vultures cleaned up. However, cows are treated with a drug called aceclofenac which the cows metabolise into diclofenac which is killing off the vultures. This has been causing a major crisis because the cows are rotting and being eaten by feral dogs which are increasing in large numbers and the dogs have rabies. I immediately pricked up my ears because I have a diclofenac cream which I apply to my bursitis as it is an anti-inflammatory. I then read that cows are doing well on Meloxicam instead which does not poison the vultures. Hmm, I take Meloxicam too so I figure from that I must be an arthritic old cow!!!!! Matt doesn't think this is interesting, I find it absolutely fascinating. I was telling this to people in the bowling alley and one friend said she had been given diclofenac pills and they had made her ill. She and the vultures but their illness was fatal.

Regrettably Monday bowling was pretty lousy all round although finally in the last game we won some points. However, we were up against the top team. One of our team did bowl above his average in every game and one had a 200 game in the last game. Matt and I were along for the ride I think.

I love dishes like this although I would have to buy a lot of the ingredients. Funnily enough I was trying to remember the name of the seaweed we used when we made sticky rice for sushi, it was Kombu and tasted absolutely delicious. I have the soba noodles which is a start but definitely not the dashi or Kombu.

Chef Douglas Keane of Cyrus restaurant in Healdsburg, California, and an F&W Best New Chef 2006 creates a quick but flavorful broth using kombu (a type of seaweed) and dashi powder (an instant Japanese stock made from shaved bonito--tuna flakes). He poaches eggs in the broth and 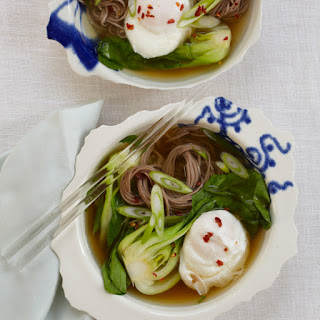 serves them for a protein-rich lunch or even breakfast.

1. In a medium saucepan, cover the kombu with the water and simmer gently until the kombu rises to the surface, about 5 minutes. Remove from the heat. Add the dashi powder and let steep for 20 minutes. Strain the broth through a fine mesh strainer.

2. Return the broth to the saucepan and bring to a simmer over moderate heat. Add the soba noodles and the sesame oil and cook for 3 minutes. Add the bok choy and submerge them in the broth with a spoon. Crack one of the eggs at a time into a small bowl and gently tip it into the warm broth. Poach the eggs until the whites are just set and the yolk are still runny, about 4 minutes. Remove from the heat.

3. Using a slotted spoon, transfer the eggs to bowls. Stir the scallions, soy sauce, lime juice and crushed red pepper into the broth. Transfer the soba noodles and bok choy to the bowls, pour the broth on top and serve immediately.

Author Notes
Dashi powder is available at many health food stores and at Asian markets.