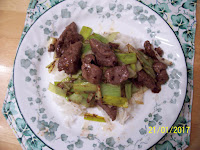 As I said I would, I cooked the recipe for Crispy Lamb with Cumin, Scallions and Red Chilles on Saturday night. I made a few alterations, I didn't have cumin seeds only ground cumin. I didn't have green onions so I used leek and I only had pepper flakes. However, it didn't seem to make a noticeable difference and was absolutely delicious. I served it over rice. I had a 3 lbs roast of lamb which is now a 2 lbs one and which will be used twice more to make this dish. I was a tad disappointed because there was no way it was crispy, I thought the egg white in the marinade would achieve that but it didn't. However, we both enjoyed it very much. I used to have two large woks and Matt did a lot of Chinese cooking, however, we hadn't used them very much in years so we got rid of them. Typically, I could have used one to make this dish.

Incredible weather, it's been thick fog for three days. We still have some snow but it's been warmer

which is what's causing it. Sunday, it seems to be thinning down somewhat but it has, by no means, gone yet. I don't think I ever remember it being this foggy in our part of Canada before. Hmm, it did thin down around noon both on Saturday and Sunday, but by mid afternoon it was as thick as ever. You really can hardly see your hand in front of your face. No idea what it's like at street level as we haven't been anywhere. 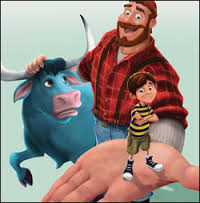 I saw a cute movie on my computer yesterday, Bunyan and Babe which I enjoyed. Basically a kid's movie I guess but then I am a big kid according to Matt. Babe's voice was Jeff Foxworthy. John Goodman voiced Bunyan and Kelsey Grammar did the two villains. Babe, the Blue Ox was funny.

This is interesting, I haven't made Scotch Eggs in a long time and I certainly didn't make them for picnics. But here is a soft boiled version which sounds pretty good. At the end they talk about baking the eggs. No doubt healthier, but the fried version is delicious. I just realised this recipe says 1 lb meat to 6 eggs. I always used 4 eggs for that amount of sausage. Also, I always use a Fry Daddy to cook my Scotch Eggs so they are in deep oil.

A common picnic and party dish in the UK, Scotch eggs were likely first inspired by the Indian and Pakistani dish nargisi kofta, which encases a hard-boiled egg in spicy ground meat. This soft-boiled 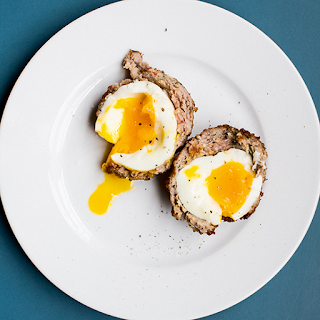 1. Place the eggs in a pot, then cover with 1 inch salted water. Bring to a boil over high heat; as soon as it is boiling, cover the pot and remove from heat. Allow to sit for 4 minutes in the hot water, then carefully transfer to a bowl of ice water. Allow to cool, about 5 minutes. Carefully peel the eggs.

2. Combine the sausage, mustard, parsley and nutmeg, mixing together by hand. Divide the sausage mixture into 6 portions; spread each one out into an oval shape. Add an egg to the sausage, then gently form the sausage around the egg as evenly as possible.

3. Warm the cooking fat to 350° in a skillet, then add an egg or two. When first adding the eggs, gently roll them back and forth to allow the sausage to cook evenly and retain a round shape. Cook until the sausage is cooked through, about 5 minutes per egg.

4. Preheat oven to 170°. Transfer the cooked egg to a plate lined with a paper towel, then place in the oven to stay warm while finishing the other batches of eggs.

Author Notes
To bake the eggs instead of frying, place the sausage-covered eggs in large muffin tins and bake at 425? until golden and cooked through, about 30 minutes.