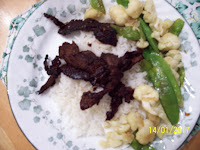 couple of times. It suddenly hit me in the middle of the night that I didn't have a pear which is what the recipe calls for. So I improvised and used half an apple instead. As it turned out, it was fine. I couldn't taste any difference. So that is useful to know. Looking at this picture, I would never get a job as a food photographer would I?  It really looked so much better than this. The meat is sitting on top of rice which hardly shows.

Some of the recipes I get in my email are a bit stupid. Like the one I read the other day which informed me I could have it on the table in 30 minutes from start to finish. I then proceeded to read it and it called for pre-chopped onion, pre-chopped carrots and such and then called for a rotisserie chicken. How many of us keep pre-chopped vegetables handy and just happen to have a rotisserie chicken as well. I actually tried keeping pre-chopped onion in the freezer once but it didn't work very well - couldn't get what you needed off the frozen lump. I might try it again one of these days and spread it out on a tray to freeze and then put it in a bag. I do have chopped peppers frozen but they are easy to split up. Good for stews and gravies.

Locally we have been complaining about the fact that the city is installing a Light Rail Transit System. Roads have been closed for years and getting anywhere in the city has been dreadful. Still not completed. I also understand that Bombardier, who are making the actual train cars, is not going to be read when we are. This weekend I read that Hamilton is going to be doing the same thing. That is a very big city and I cannot imagine the chaos this will cause there.

I wanted to use up some snow peas and some cauliflower tonight so I found a recipe for Garlicky Cauliflower and Snow Peas. I found something good in a blog called Judy's Kitchen. I left a comment saying I was going to try the recipe and Judy replied with the following: Hi, Jo -- In the interests of saving time and more pots, I now just put everything in one preheated cooking vessel, use less oil, and cook on medium-low to low heat, covered, for about 5 minutes. Leave in pot, covered for another 3 minutes before serving. Of course, if you like your cauliflower crunchy or if your flowerets are very small, your time would be less. Very good sprinkled with Parmesan and crushed thyme. 😊 When I got this email I had already steamed the veg. However, it was very good as was the Bulgogi. 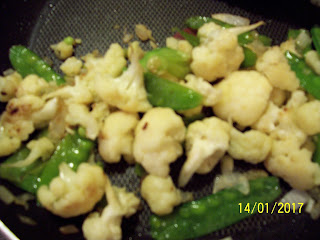 Trim cauliflowerets and snap peas; steam for 3 minutes. Set aside to cool. Heat olive oil and scallions over medium heat in large heavy saute pan or fry pan till scallions start to sizzle; lower heat; add garlic, cauliflower and peas and stir for 3-4 minutes, or till veggies are well coated with olive oil and everything is hot. Salt and pepper to taste and serve immediately