Over the weekend I was mentally composing a letter: Sunday we had a lot of sunshine, so maybe Mother Nature is listening.

Dear Mother Nature - thanks so much for the white Christmas, you haven't given us one in years and we do appreciate it. However, the season is now over, so could you please take it all away again. Jo 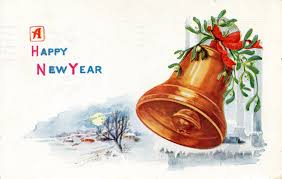 On New Year's Eve a friend from the Carolinas called me and talking to her, I so wanted to be in NC. We used to have a wonderful time there, especially at this time of year. Sadly a number of our friends have now died and I guess it wouldn't be the same but even so..... I cooked a Steak Diane for us, the steak is not tough cooked that way and we finished off the Christmas Pudding with Rum Butter. .I love that stuff. We were given some chocolate liqueur cups and I was filling  them with rum butter, yummy. Of course I took the calories out first!!! Most of the turkey is now in the freezer in one form or another but I still have a load of breast meat which is good for lunch. 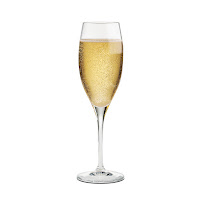 I stayed up to watch the ball drop in both Buffalo and New York but for the first time in 45 years, Matt went to bed. I wasn't too happy with him. I was watching That's Entertainment and also saw most of the second one - it was on Turner Classic Movies so I do hope they play it again. Wonderful to see all those actors of yesteryear. Needless to say, Debbie Reynolds turned up in quite a few clips. I got quite choked up at some of the bits of older films which I remembered and loved so long ago. As I was on my own, I didn't have my glass of bubbly. Thought about it,, but went to bed without it. Sunday I always have bubbly late morning so this time I allowed myself 3 glasses.

Because of the snow, I didn't manage to go to get my hair cut. Now I could almost wear braids. Unfortunately the salon is not open on Monday, foot nurse coming on Tuesday, will have to try and go Tuesday afternoon. When it gets this long, it drives me batty. I have never understood these girls with really long hair. I personally don't think it is attractive - neither does Matt - and they are forever having to toss it out of the way. Many years ago, I had long hair I could sit on, I used to wear it in braids as a kid or a chignon as an adult. I moved into an apartment in London when I was 20 and in a very short time had it cut. My mother was not happy, but I was delighted. To me, the hair in this picture is ridiculous. I have no doubt many of you will disagree.

This doesn't look much like the Welsh Rarebit of my childhood, but it still sounds as though it would be tasty. Funnily enough I haven't made Welsh Rarebit in many a long year. I looked this up on BBC Good Food and they say beer or milk. Not many of us have a strong dark beer around.

Anyone can lay a few slices of cheese on toast and melt them, but creating a thick sauce of cheese, beer and spices and then spreading it on toast creates one of the best late-night snacks I know. This is 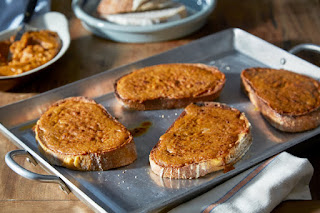 Welsh rarebit, or rabbit, a traditional British dish whose name has a long and complicated history, one we will not go into here.

2 Tbs butter
2 Tbs flour
1 Tbs mustard powder, or to taste
½ tsp cayenne, or to taste
¾ cup strong dark beer, like Guinness
2 Tbs Worcestershire sauce, or to taste
1 lb Cheddar, Double Gloucester or other English cheese (or other good semi-hard cheese, like Comté or Gruyère, or a mixture), grated
4 to 8 pieces lightly toasted bread

1. Put butter in a saucepan over medium heat and, as it melts, stir in flour. Continue to cook, stirring occasionally, until golden brown and very fragrant, 3 to 5 minutes. Stir in mustard and cayenne, then whisk in beer and Worcestershire sauce.

2. When mixture is uniform, turn heat to low and stir in cheese, again stirring until smooth. Remove from heat and pour into a broad container to set (you can refrigerate for up to a day at this point).

3. Spread mixture thickly on toast and put under broiler until bubbly and edges of toast are crisp. Serve immediately.