Much to my delight this morning, we ended up with three of the five of us at our coffee morning. I was so pleased the other two could make it. Will try and shoot for all of us next time. We had coffee from the new Starbucks at my grocery, not actually a restaurant per se, but a coffee bar with the tables some distance away. Wouldn't recognise the store these days. I normally drink decaf. Big mistake at Starbucks, ended up with some fancy made decaf, can't remember what they said now, but it cost me $2.78. I won't do that again. Not sure what my friends had but think one guy had a plain black coffee so that is what I will go for next time. That was highway robbery. We had a good chat about our spouses and how things were proceeding plus a few laughs about other things. The man is a photographer so I asked him a couple of questions the upshot of which is I guess I will be throwing my Kodak away, it is obsolete so cannot get it repaired. Also, he explained to me why my tablet wouldn't take a proper picture of a sunset the other evening. Whilst in the store, I remembered to get myself some snow peas for the shrimp dish from the other day. Only trouble is, I then remembered the scallops, now I don't know what to cook. Decisions, decisions.

I was planning to do a couple of things on the way home but had a bit of an upset stomach so had to dash home. Must have been the price of the coffee. We had lunch and then ladydog arrived with Zoey. Matt was particularly pleased to see Zoey. It was so nice to see her (ladydog not Zoey although it was nice to see her) again, talked some about her cruise which sounded as though they had a super time except for  the rioting in Chile. Also told me something I was unaware of, when going through the Panama, they put a pilot and crew on board the ship and the Captain has to be hands off. As she said, there was not much more than a foot on either side of their ship, and right at the end, they scraped the ship in one of the locks. The Captain was not best pleased. There was a big scrape on the ship where it happened.

I was going to go to Victoria St. Market with ladydog when she left but at the last minute decided it was safer not to. ladydog was hoping to get lamb chops but apparently they didn't have any, but she still spent a goodly amount. Told you, they have the most expensive bananas in town. I will be going there tomorrow for bananas and 'ostrich' thighs, wonder if I can escape with just those two items.

Been getting lots of recipes for mashed potatoes lately, is that what lots of people serve with their turkey? We always did roast potatoes in England. Well and here of course. I have never been a big fan of mashed potatoes although I love puréed potatoes as done by Bobby Flay. I loved this when it was creamy and almost liquid as a purée should be, but Matt preferred it to be more firm. He usually won. However,  he doesn't cook these days so....... I have posted this recipe before, but it is a good one. 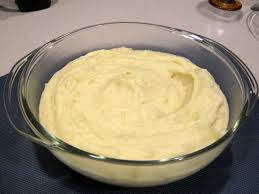