Quiet weekend with lots of rain on Saturday for which we are truly grateful. Although some people complained they would have preferred it to fall during the week. I guess if you are working all week, it makes a difference, we tend not to think about it. We are both in countdown mode for our trip to NC next month, Matt keeps telling me how many weeks now. Right now its four.

There is a picture which I have seen frequently on Facebook and which appeared on Good Morning America on Sunday of a man who takes his dog down to the lake and stands holding him as he floats in the water. This way, it gives the dog pain relief and is the only way he can sleep.

The dog is apparently 18 years of age and is very arthritic. It appears that, the picture having gone viral, people have contacted the veterinarian and offered to help pay the dog’s medical bills. People are so kind sometimes.

Oops, I missed it. The closing ceremonies which everyone appears to be raving about. I meant to watch earlier in the day but got overtaken by other things, when I

did turn the TV on later in the evening, the musical part was just about over and I honestly didn’t want to see the parade of athletes. I have read lots of people’s comments that it was a great show, the bit I saw was not really my kind of music although certainly had a good beat. I saw some elderly guy arrive in a London taxi cab who was, apparently very popular, His voice and that of the lead singers of the groups I did see, were definitely not my thing. Maybe I missed the best bits, I don’t know, it all looked pretty spectacular though. The British must be tickled pink to have won so many medals, including 29 gold. It seems to pay being the host nation, as far as medals are concerned that is. I hope they didn’t make a loss on the games themselves.

Today I have to have my X-ray to see what the problem is with the extra bone in my lumbar region. Hope it will lead to some resolution of the problem.

This is another Eating Well recipe which I found on Cooking.com and I thought it sounded pretty good. I don’t usually bother much with dips except for the one with artichokes and cheese which I tend to pig out on. In case you don’t know, crudités is the French way of saying raw vegetables.

Feta and Herb Dip with Crudités 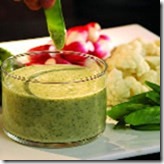 Make Ahead Tip: Cover and refrigerate for up to 2 days.