Canada is so excited, we got a silver yesterday morning in rowing, they were beaten by a very good German team, but only just. Nevertheless, lots of Olympic excitement. Apparently at the last Olympics we didn’t win any medals in the first week, this year we have, so far, 4 bronzes and a silver so that makes us ahead of the game. Whenever I comment about how we aren’t doing so well Matt points out our population which is 34.5 million as opposed to the US at 311.5 million and even Great Britain at 60 million. Its hard to remember that, for such a vast country, our population is actually quite small. Then, talking to I had to look up the population of India 1,241,949,910 and then China 1,344,130,000 – unbelievable really. The Indians don’t produce many medal winners, but the Chinese certainly do. As of the time of writing India have one bronze.

Yesterday we had to go for the emissions test on our car, every two years this

happens. Whilst waiting in the office, they had all kinds of funny notices up, the one I liked best was “Our credit manager is Helen Waite. If you need credit, got to Helen Waite”. They also offered credit to over 75 yr. olds so long as they were accompanied by both parents!!! I am pleased to say that our emissions test was fine so when I got back I went online and ordered the new 2 year sticker for the car. That’s $40 for the test and $148 for the license on the car. Then this year I

have to get my driver’s license which is another $75. Expensive year. I don’t know how its done in England these days, used to be a license displayed on the windshield, here its that little green (or other colour) tag on the corner of the license plate. I have been told that English ones are still pretty much the same in fact a friend sent me a link to some pix of UK tax discs. Some of them are quite funny in fact.

I do NOT like canned tuna. Nor do I like overcooked fresh tuna, it tastes the same. However, some time ago Matt invented a way of preparing canned tuna which I will eat. We had it for lunch the other day which is what reminded me to share it. I have posted this recipe before, but not for a very long time. Funnily enough I received a Mushrooms Canada recipe which has a lot of similarities. 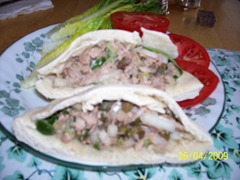 Mix everything thoroughly apart from the lettuce. Cut two pita breads in half, line them with shredded lettuce and then load up the tuna mix, serve with tossed salad greens.