shop in North Carolina, painted or unpainted. There is a religious legend associated with them which you can read here, versions of this appear on many postcards available in sea side towns, but, it never occurred to me, until today, to find out what a sand dollar really is. Google to the rescue of course and I found a Wikipedia page all about them. I realised they must have been alive at one time, but that’s all I knew. Some of it is interesting reading telling how they move around, how they clone themselves when under attack, and how they normally mate. They are not exclusive to the east coasts of the States either. Apparently the one with which I am most familiar is the Keyhole Sand Dollar. By the time I usually see them they are totally white and frequently painted. People do find them on the beaches but few and far between, maybe the professionals have grabbed them all early.

I seem to be plagued by snakes lately. I understand a 42 ft. long fossilized snake 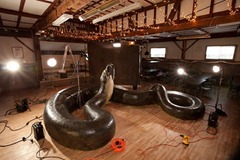 was found in 2009 and now a sculptor, Kevin Hockley, has built a replica of the thing. It was so big, it snacked on crocodiles. It was christened Titanoboa. and is something in the region of 58 million years old. The critter was found in Colombia and stunned paleontologists. There is a documentary

about it on TV which is what brought it to my notice today. In fact, I seem to remember I blogged about it three years ago. I mean, look at that damned thing, the thickest part is as high as a man’s waist. The second picture is a representation of what it would have been like in its swampland home. The article talks about how it was found. The mine where it was found has, apparently, been quite a source for fossils. And I was worried about the Pythons in the Everglades, mind you, they are still living.

Witherspoon (Elizabeth) in the lead. Mark Ruffalo played the male lead (David). She gets into a major car crash and her spirit haunts her apartment which is being leased by David. He eventually agrees to help her remember who and what she was/is and discover she is in a coma in the local hospital. Some of its funny, some of it’s tear jerking. Thoroughly enjoyed it. I guess it was more of a chic flic because Matt went and played a computer game. Of course Matt doesn’t like movies with things that aren’t true like ghosts. I, of course, do. Then last night Turner Classic Movies showed “Guess Who’s Coming to Dinner” which Matt swears he had never seen. I am sure I did see it many years ago but had basically forgotten a lot of the movie. What a great one it was, you couldn’t do better with Spencer Tracy and Katherine Hepburn and then adding Sydney Poitier to the mix, I wasn’t going to watch it again, but I am so glad I did. I hadn’t realised that the actress who was the daughter was played by Hepburn’s  young sister. They said Spencer Tracy died 17 days after the completion of the film.

Having just read an article expounding the efficacy of blueberries (in other words, how good they are for you) I thought I would share the following recipe. The article basically said a cup of wild blueberries a day will keep the doctor away. Matt has blueberries with his breakfast, I never do, maybe I should start.  Blueberries are good for high blood pressure and diabetes and are good for both heart and brain health. The emphasis here though, is on wild blueberries which I certainly don’t see round here. I loved baked camembert or brie dishes too, so I will certainly be trying this one out. 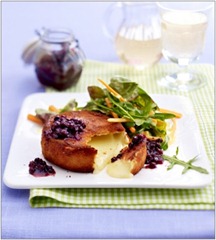