about a bottle on the track, Monday they was a report that a man had been arrested for throwing a plastic bottle. A Dutch judo competitor says she thumped him because she was so annoyed. Nothing more of the story at the time of writing however. You can just see the bottle behind the middle runner. What a weird thing to do. Luckily it didn’t interrupt the race and of course it was wonderful to see Bolt streak to the winning post.

According to the news, lots of Canadians have reached semi finals or even finals

in 1,100 metre kayaking for Adam van Koeverden so hopefully we might see some more medals for Canada soon. A friend is lucky because she will be going to see the semi finals of the Canada-US women’s soccer match in Manchester, she already went to Old Trafford for one game. As an ex pat English woman I am delighted to see the UK doing so well. Being the host nation certainly seems to give athletes a boost. I would also be delighted to see Canada get a few more golds. 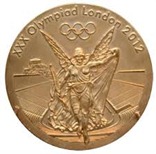 Talking of medals, Hilary Melton-Butcher described them in her blog yesterday – she said that in the original games the winners would get wreaths and amphorae of olive oil. Today the medals weigh the same as a can of baked beans. I know which I would rather have. Admittedly the medals last longer, but the olive oil would be of more use to me. The golds are not, of course, solid gold and haven’t been since the 1900 games but, as I wrote a day or two ago, they have to be plated in a minimum of 9 grams of gold. Hilary describes them in more detail.

Sadly the Canadian team did not beat the US in the semi final soccer match yesterday. The match went into overtime and the final result was 4-3 a very good effort on the part of the Canadians. 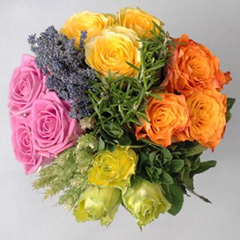 there before me. I had been thinking what an attractive posy of flowers, but it never occurred to me that there was significance in the construction of the whole bouquet, or, as Hilary points out, nosegay. Do read her blog about this delightful presentation which is being given to every winning athlete. From the herbs which are being used as well as the flowers themselves, it must smell absolutely delightful, hence the term nosegay being a delight to the nose. Of course nosegays were once used to disguise the smells which were prevalent in the streets of the city in those days. In Charles II time oranges were used for the same purpose frequently stuck with cloves. Pomanders were often carried by the well to do; they hung around their necks and could be sniffed any time there was an offensive odour. Aren’t the bouquets beautiful though? I wouldn’t mind having one of them.

I am not, I must confess, a big fan of Mexican food, but I do like Guacamole and this recipe sounded a good one, plus it can be used in several different ways.

Guacamole with Charred Jalapeño and Scallions

Contributed by Grace Parisi at Food and Wine 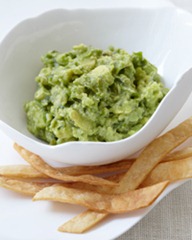 ingenious ways to use it: in a soup, an hors d'oeuvre and a salad dressing.

Make Ahead: Press a piece of plastic wrap directly onto the surface of the guacamole and refrigerate overnight.

Notes Variation: For a brighter, crunchier guacamole, finely chop the scallions, garlic and jalapeño and stir them in raw.