Went to my internist, she upped one of my meds, I was taking 60 mg. Talking to my pharmacist she said I was only on 30 mg which had been changed in May. Not as far as I k

new. No idea what happened there. The result of this confusion is I am now back on 60 mg and I have told the pharmacist to wipe all mention of 30 mg off her computer. Sheesh. Must admit I had never noticed til today that I had somehow been put back on a lower dose. Mind you, Matt was the most awake of all, he was going down to the pharmacy to drop off the prescription and return the 30s – he said surely I could take two 30s a day until they were finished. Obvious, right? Not to the pharmacist or me.

Earlier in the day doing my banking, there was a segment recommending the use of one’s debit card cross border, one of the reasons for this was so you didn’t need to carry “access” cash.  Obviously should have been excess. I phoned and told them this afternoon. Sheesh.

I’m not basically interested in politics generally and the US particularly, but it made me laugh yesterday when I saw the Republican Convention had reached out to women and Latinos. If I were an American woman, I know what I would be telling them to do with their reaching out all the time Aikin was a member of their party. There’s another sheesh.

I’m a bit behind the times, but apparently the Venezuelan Poodle Moth has 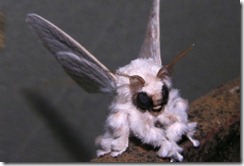 sparked a lot of interest on line and in scientific breasts. When I first saw the picture I thought it was a hoax, I’m still not sure it isn’t, but I am no botanist or entomologist. The pictures were first captured in 2009 and have only recently sparked interest. People have likened it to a Pokemon character. There has been  nothing to compare its size to either. If it is genuine it is a new find, but what a weird looking critter. Time will tell I suppose, now the world has seen it, there will be entomologists haunting Venezuela to see if they can confirm its existence.

I got this recipe from Cooking.com and thought it sounded delicious. I love Crème Brûlée and many times choose one for dessert although I confess I have never made one. Time I got round to doing so I guess. We’ve had the hand held torch for years.

White chocolate enhances the creaminess of the custard and bala 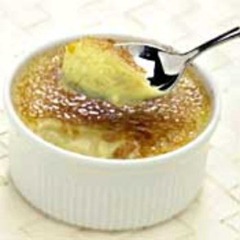 nces the sweet and tart flavors. Due to the high amount of chocolate, if over-baked, the custard will have a denser consistency but remain smooth and luscious.

Tip: There’s no need to wait for the broiler to heat up. A hand-held culinary torch caramelizes the sugar quickly so the crust is crisp and golden brown and the custard stays cool. The torch can be used on crème brûlée, tarts and meringues.