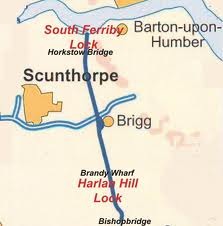 Thanks to a blogging friend in Whitstable, England, I have found out who the lonely Channel swimmer was, Ted May. She sent me a link to a web page about him. He was from Kent which is the county I called home for many years, but he was working in Lincolnshire where we lived for a few years, and where he practiced swimming in the canal where we lived. Having been doing some googling the canal was part of the River Ancholme which seems to have been split into the new and old rivers, I am not quite sure on which we lived, but I do know the town of Brigg was where our barge was actually moored, or just outside. If you look at the map, Ted May would have swum from Brigg to the South Ferriby Lock and back again when he was practicing.

These are two pictures of our Thames Barge, Iota, when she was at Brigg 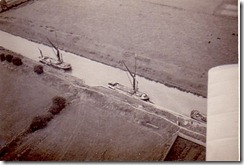 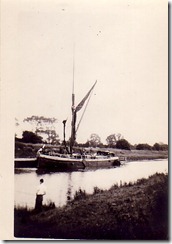 . The second barge belonged to a friend of ours. In fact both he and my father had moved to Brigg in order to be civilian instructors for RAF pilots and they used to travel to the aerodrome at Kirton Lindsay (we used to call it Kuala Lumpur, no idea why other than the initials) every day. My father used to ride a motorised bike or what we called a put put. We were pretty broke at the time as he had lost money (not sure if he went bankrupt) on his factory in Kent. I cannot, for the life of me, remember the name of the other barge although I can remember the name of the guy who owned her.  To get to Brigg we sailed from the river Medway up the East Coast of England to the Humber and then down the Ancholme to Brigg. Gosh that’s a long time ago. I guess the photo which was obviously taken from the air, was taken by my father or his friend. I remember I used to cycle to school from there. It was the first time I had ever been to a Grammar School (i.e. a government school) and I remember being horrified that we all got inspected for head lice.

Did a couple of things which made our vacation come closer, bought some US dollars and stocked up on drugs. The latter is no joke either, we have to take so damned many between us that we carry a special bag just for them. Like carrying a pharmacy on our backs. The exchange rate is pretty favourable for us at the moment so we figured we’d buy our currency whilst the going was good.

A friend sent a link to the following video, absolutely brilliant way of separating an egg. Its in another language, but you can see what she is doing. Only trouble is, I don’t have plastic bottles. She tried it later on and says it works.

This salad seemed to me to be somewhat different and sounded rather refreshing.

Combine cucumber, avocado and mango with a salty-sweet dressing for a taste 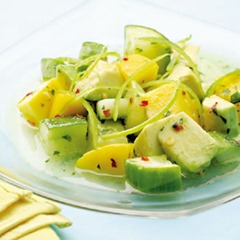 of the tropics.
Make Ahead Tip: Cover and refrigerate for up to 1 hour.
INGREDIENTS
3-5 teaspoons fish sauce (see Shopping Tip)
1 teaspoon freshly grated lime zest, plus more for garnish
2 tablespoons lime juice
1 tablespoon canola oil
2 teaspoons light brown sugar
1 teaspoon rice vinegar
1/4 teaspoon crushed red pepper
1 medium English cucumber, cut into 3/4-inch dice
1 avocado, cut into 3/4-inch dice
1 mango, cut into 3/4-inch dice (see Kitchen Tip)
1/4 cup chopped fresh cilantro
Tip: Fish sauce is a pungent Southeast Asian condiment; find it in large supermarkets and Asian markets.
To peel and cut a mango:
1. Slice both ends off the mango, revealing the long, slender seed inside. Set the fruit upright on a work surface and remove the skin with a sharp knife.
2. With the seed perpendicular to you, slice the fruit from both sides of the seed, yielding two large pieces.
3. Turn the seed parallel to you and slice the two smaller pieces of fruit from each side.
4. Cut the fruit into the desired shape.

Email ThisBlogThis!Share to TwitterShare to FacebookShare to Pinterest
Labels: How to separate an Egg, Swimming English Channel, Ted May, Tropical Cucumber Salad