a Chinese. Maybe I am old fashioned, or too much of a feminist of something, but the sight of women punching each other out is not one that appeals to me. So much for us being the gentler sex. We once knew a woman who boxed with her husband (he was professional at the time, she wasn’t) and I thought she was something of a tough broad. However, in this day and age I guess I am outnumbered. Women want to be allowed to do everything, no matter what, so naturally that includes boxing. 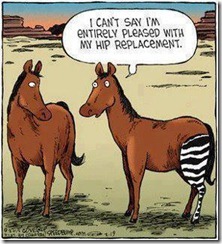 end so when I saw this cartoon on Facebook I just had to send a copy to my surgeon as well as share it with you. It really tickled me.

There is a lot of fuss going on about the Canadian/US women’s soccer match and the controversial calls made by the Norwegian referee. Not all the fuss is by Canadians I might add, but of course most of it is and FIFA are talking about disciplining the team and coach for the blistering comments they have been making. Such a shame. They now get to play the French for the bronze.

Not seen a heck of a lot of pictures from the Mars landing so far, but I gather everything is going well and Curiosity is sending back pictures. This is one of the first I gather. 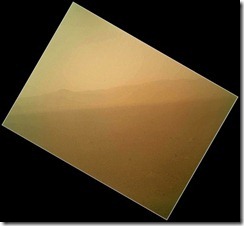 There are more pictures on this page including a video of Curiosity’s descent onto the red planet. They are expecting much better pictures as various arms and antenna unfold over the next few days.

I loved this story, Britain have been painting the traditional red mail boxes in gold in 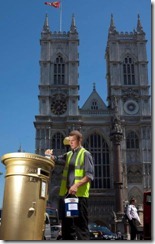 the home towns of their gold medalists in the Olympics. They say the mail boxes will be turned back to red after the games are over. But what fun and what a compliment to the medalists. They also assure everyone that mail will be collected as usual with no disruption to service. In these days of electronic mail, I wonder how much they are used, although Matt keeps on reminding me that not everyone has computers or internet connections. If I predeceased Matt, he certainly wouldn’t. He would go back to using a regular account book for finances and as he never writes to anyone, no-one would ever hear from him again except by telephone – and that would probably only be to his kids LOL.

This recipe appeared in my inbox and I thought it was interesting, not Caesar Salad in the true sense of the word, but they sound very tasty. We always enjoy endive in various ways. I have a Dutch friend who bakes them but won’t part with the recipe, she contends that then when she serves it, it will always be different.

Salads usually require forks, but Grace Parisi transforms a classic Caesar into a clever finger food. She tosses chopped endives with a lemony dressing, then spoons the mixture inside elegant endive spears, topping it with cheese and crunchy mini croutons. 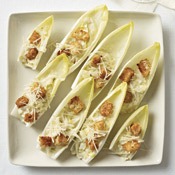 Preheat the oven to 350°F. In a medium bowl, toss the bread with 2 tablespoons of the olive oil and season with salt and pepper. Spread the bread on a baking sheet and toast for about 10 minutes, stirring once, until golden and crisp.

Meanwhile, in the same bowl, using a spoon, mash the anchovies to a paste with the garlic and a pinch of salt. Whisk in the mayonnaise, lemon zest and lemon juice, then whisk in the remaining 2 tablespoons of olive oil and season with salt and pepper. Stir in the 1/4 cup of grated cheese.

Trim the endives and remove the 60 largest leaves from 6 of the heads. Stack the leaves and trim them to about 4 inches. Thinly slice the remaining endive, along with the trimmings of the 6 other heads (you should have about 3 cups), and toss with the dressing. Spoon the salad onto each spear and garnish with the croutons and grated cheese. Serve immediately.